It was an easy ride with Hoa Mai VIP bus limousine, a three hours trip for $7 with the driver stopping right in front of the Sao Mai Hotel, situated in the calm part of Vũng Tàu.

It wasn’t in our plans to visit this little city in the south coast line of Vietnam but since our Vietnamese friends recommend it we decided to spent there 2 nights. 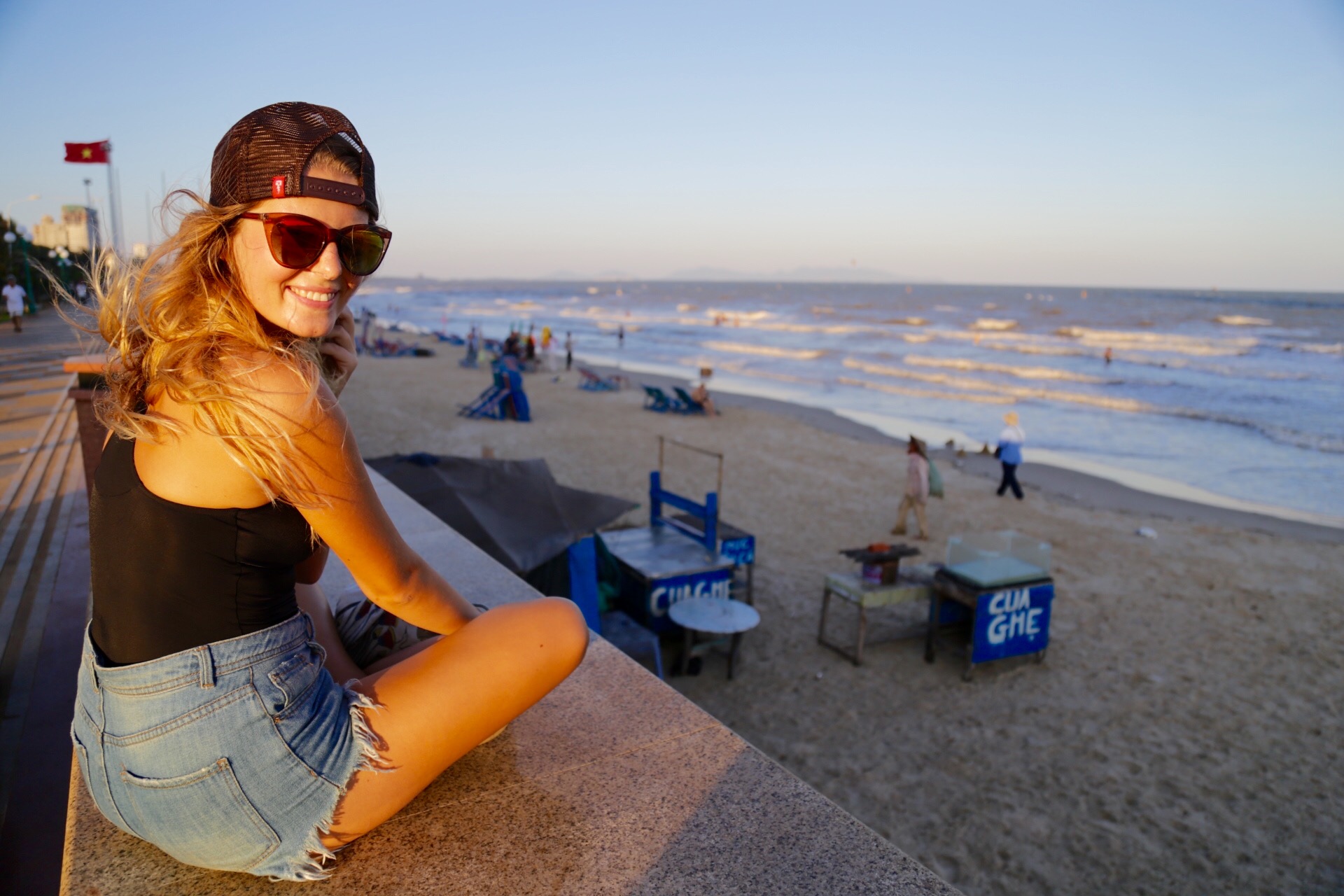 Our hotel was near the Back beach Bãi Sau, a favorite place for locals to spend their evenings. 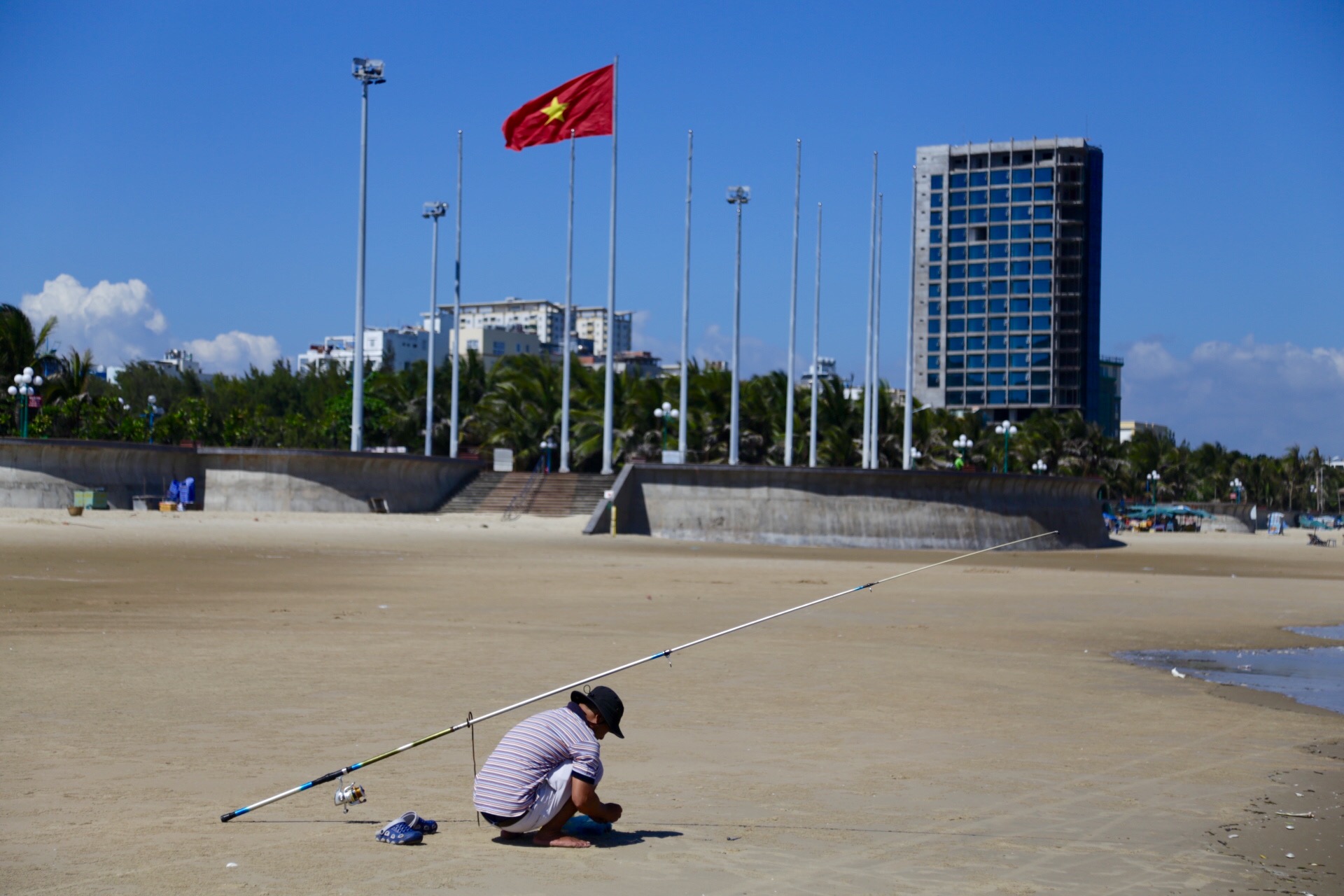 Like a daily ritual, around 6PM the coast line would change its peaceful and quiet side for a strident festive social gathering. Tons of people swimming meanwhile others were eating BBQ on the sand, local sellers selling their products from one side to another of the promenade, kids playing football, couples making selfies trying to catch the last light of the day. 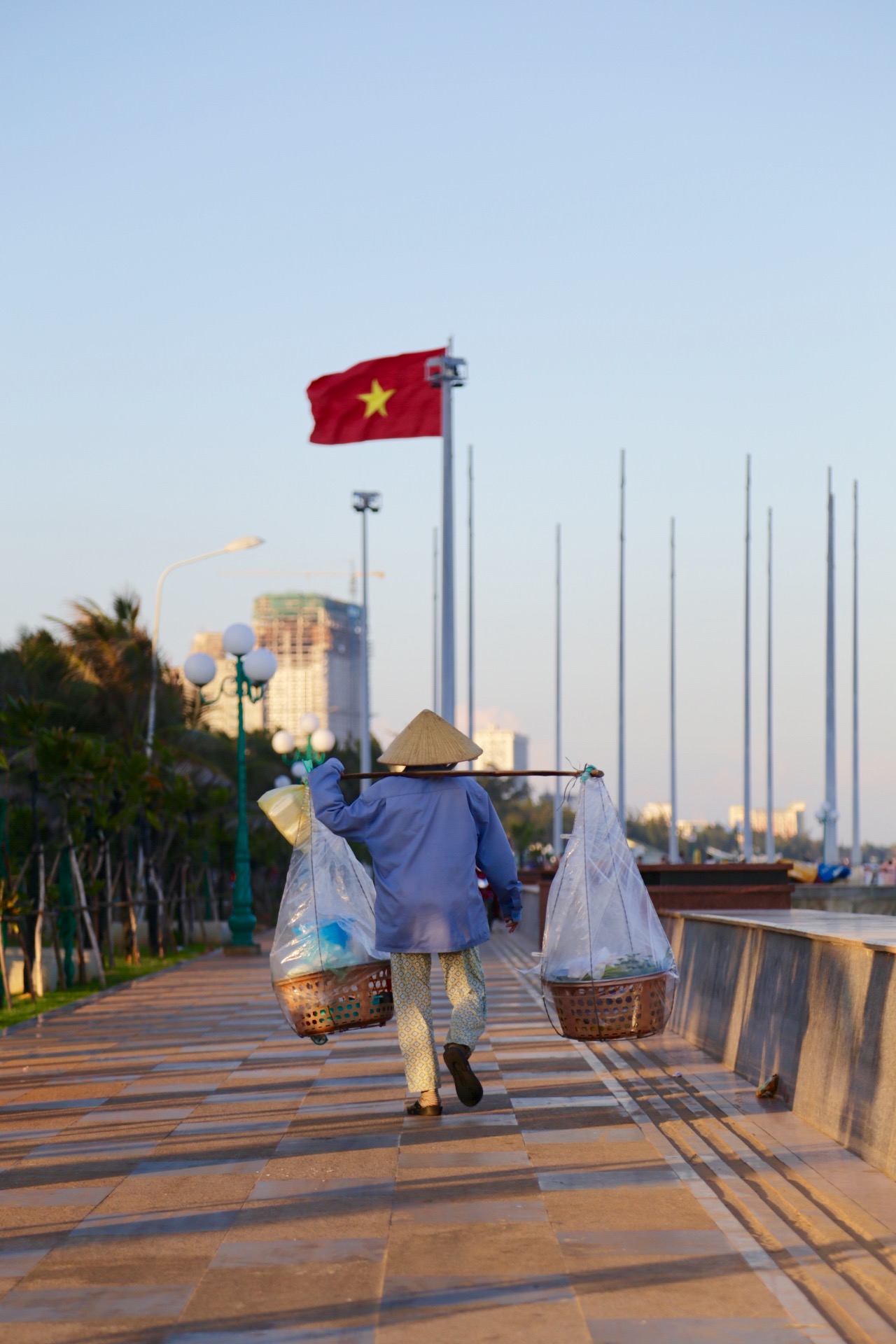 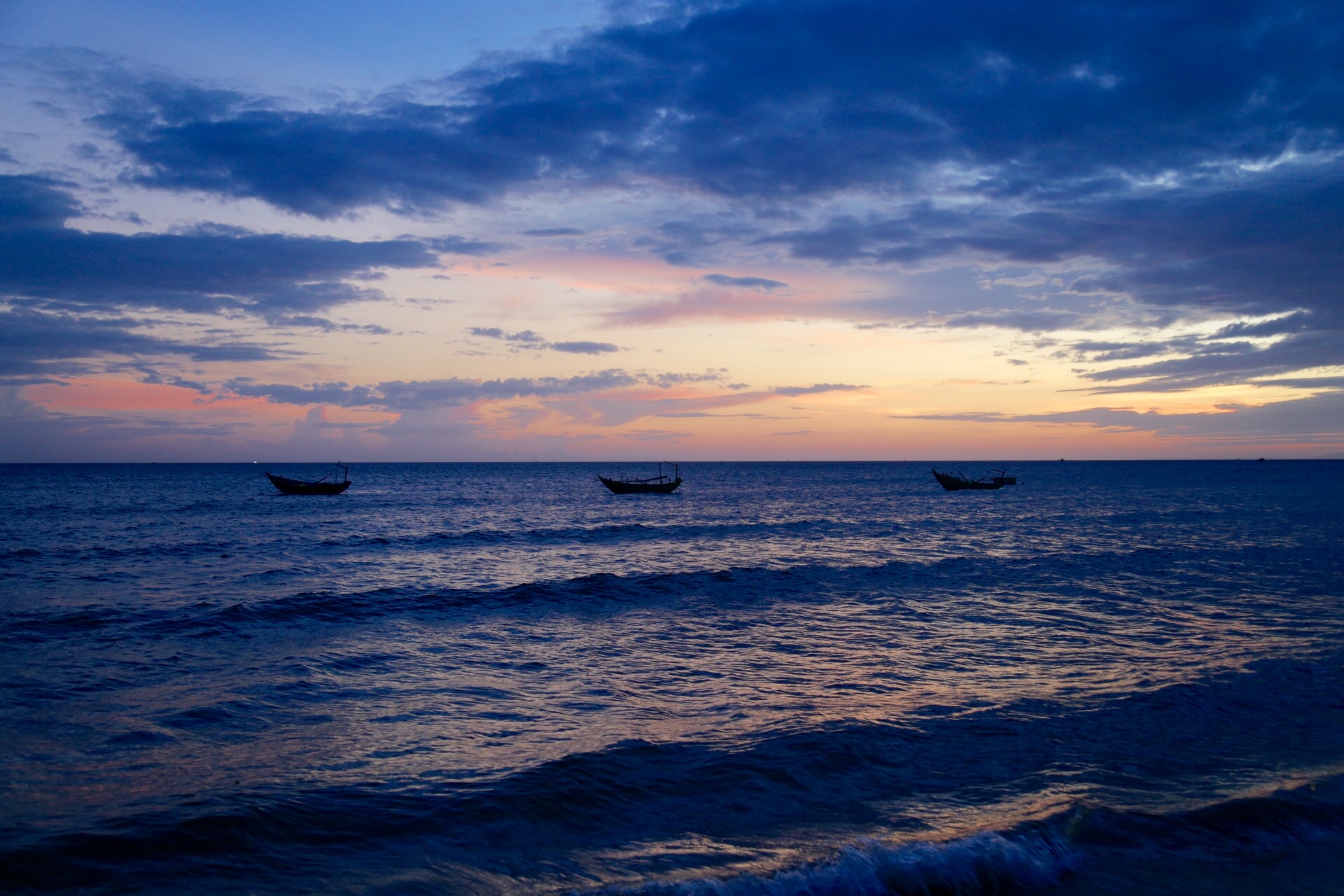 After enjoying this cultural phenomenon, we went to eat grilled fish, squid and octopus on the local street stalls where once more, we ate really good food. It was becoming a habit in Vietnam. Since we have landed in Ho Chi Minh all of our meals were surprisingly delicious.

On the next day we rent a motorbike and visited the Front Beach Bãi Trước. It was good to be back to the seaside and feel the sea spray on our faces, we were missing it since we left the Thai Islands in the direction of Chiang Mai. Finally, we could have our first swim on the South China Sea. 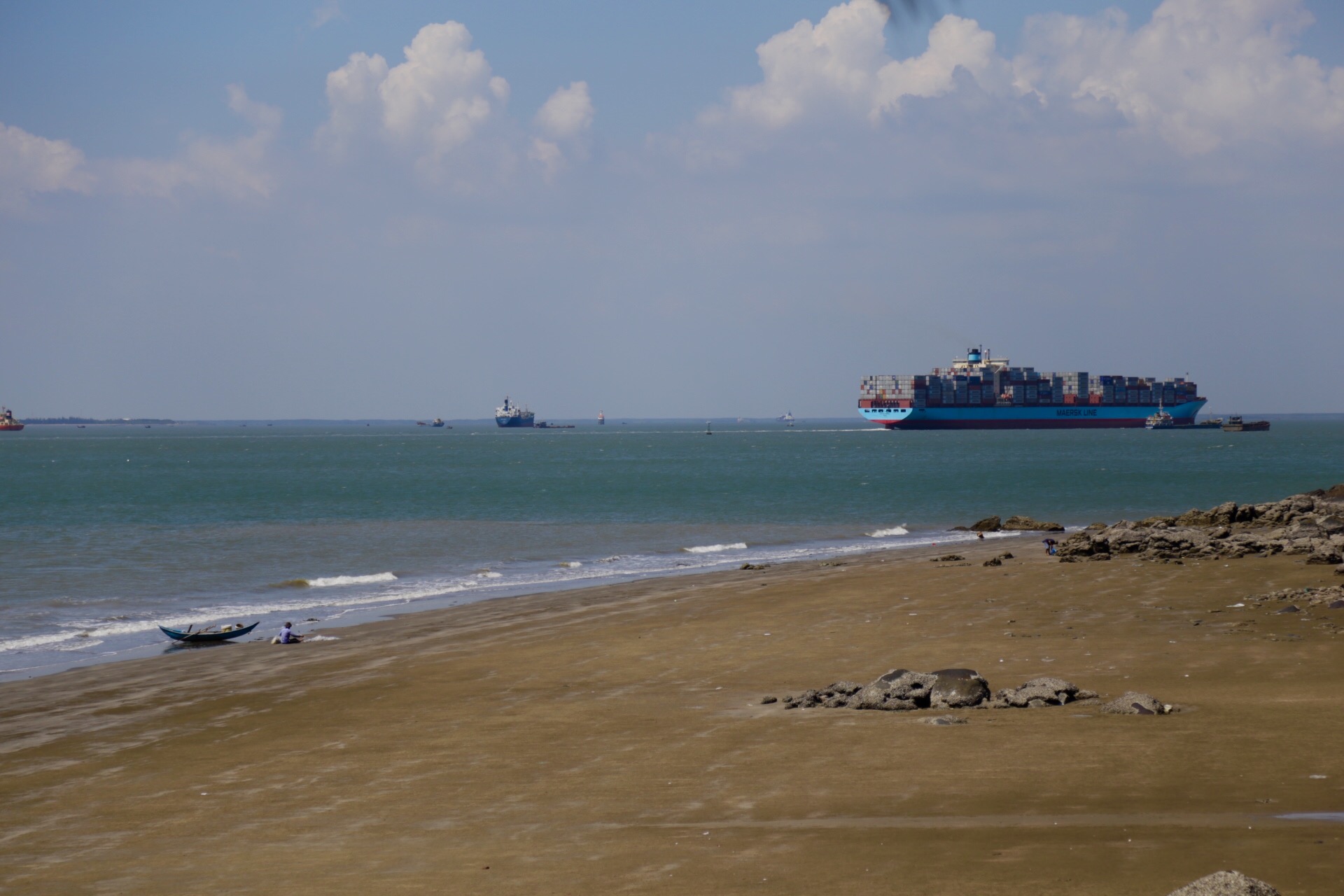 Unluckily, we didn’t spend there so much time due to the dark color of the water and the beach was a not so clean.

Then, we passed by the Hydrofoil Fast Ferry Station, an architectural landmark of the city. 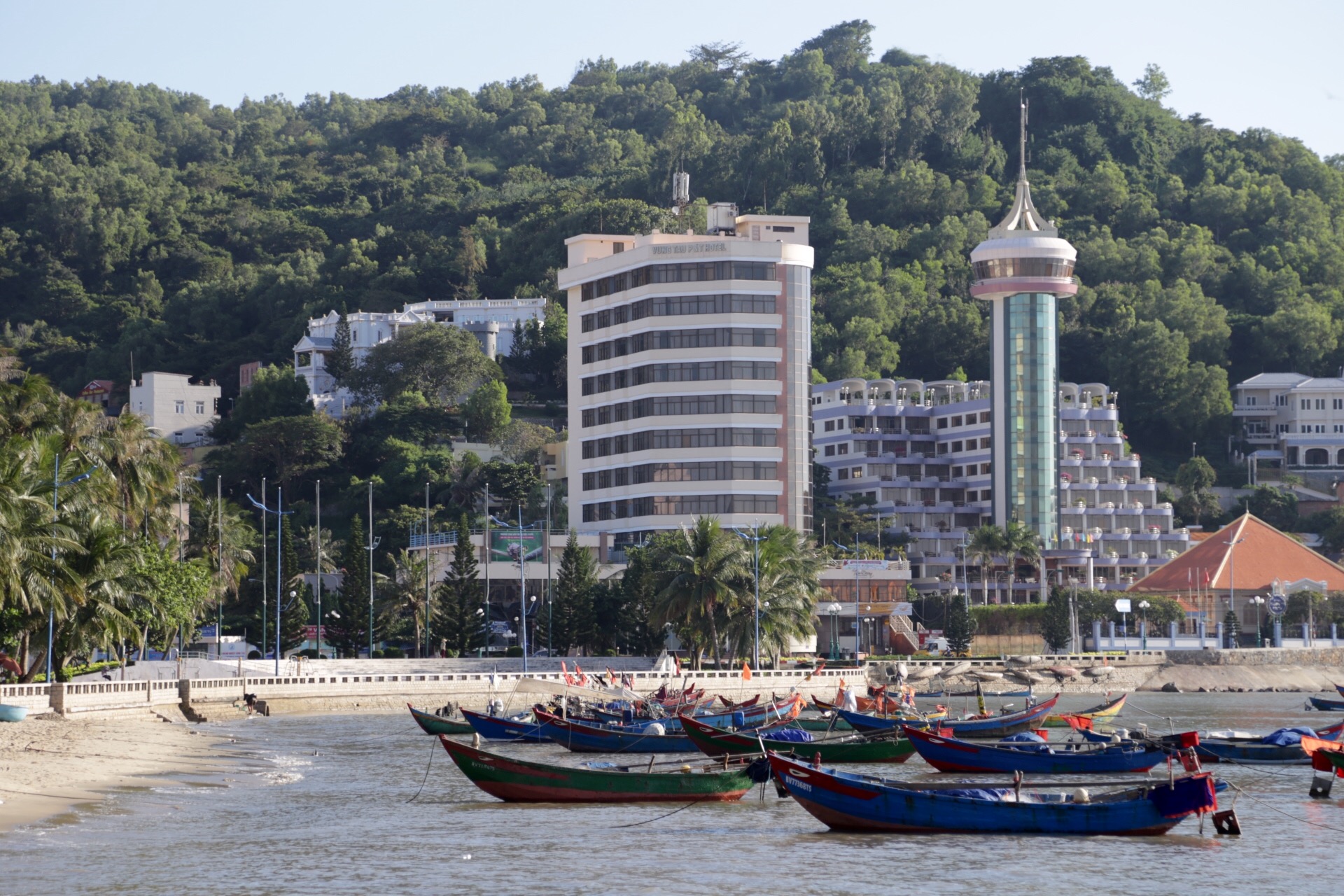 The 32m-high Jesus statue extending on the top of Nho Mount. 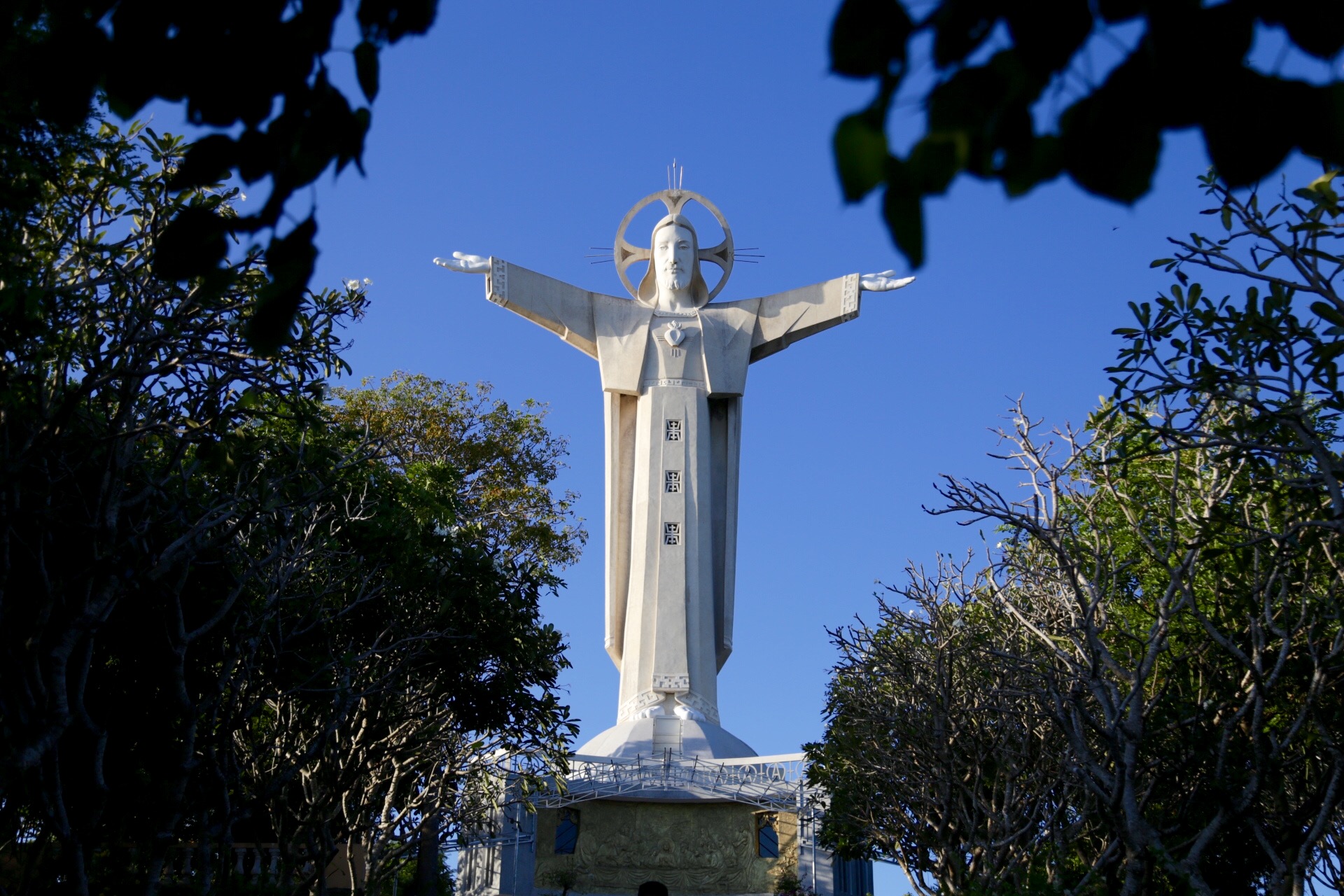 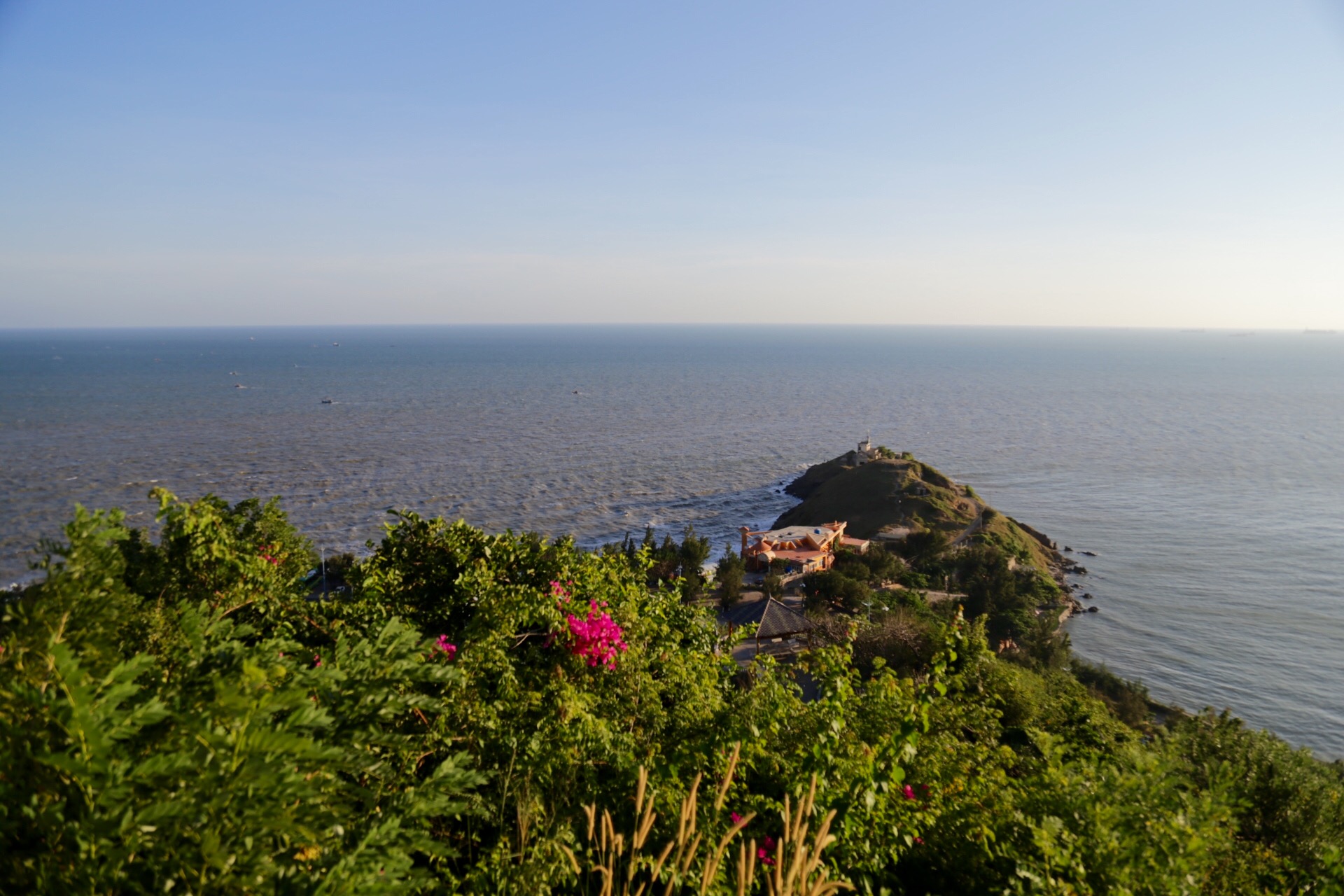 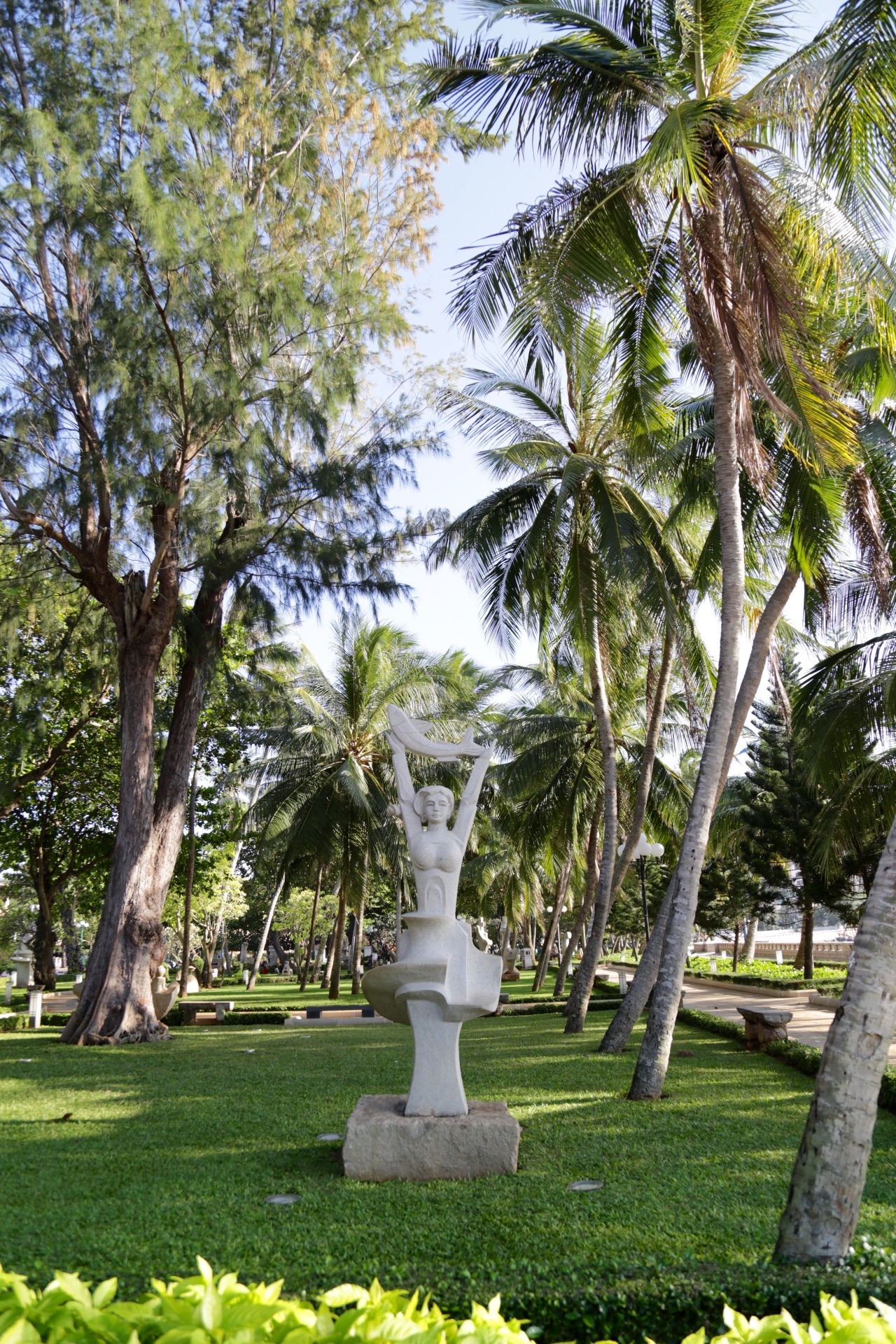 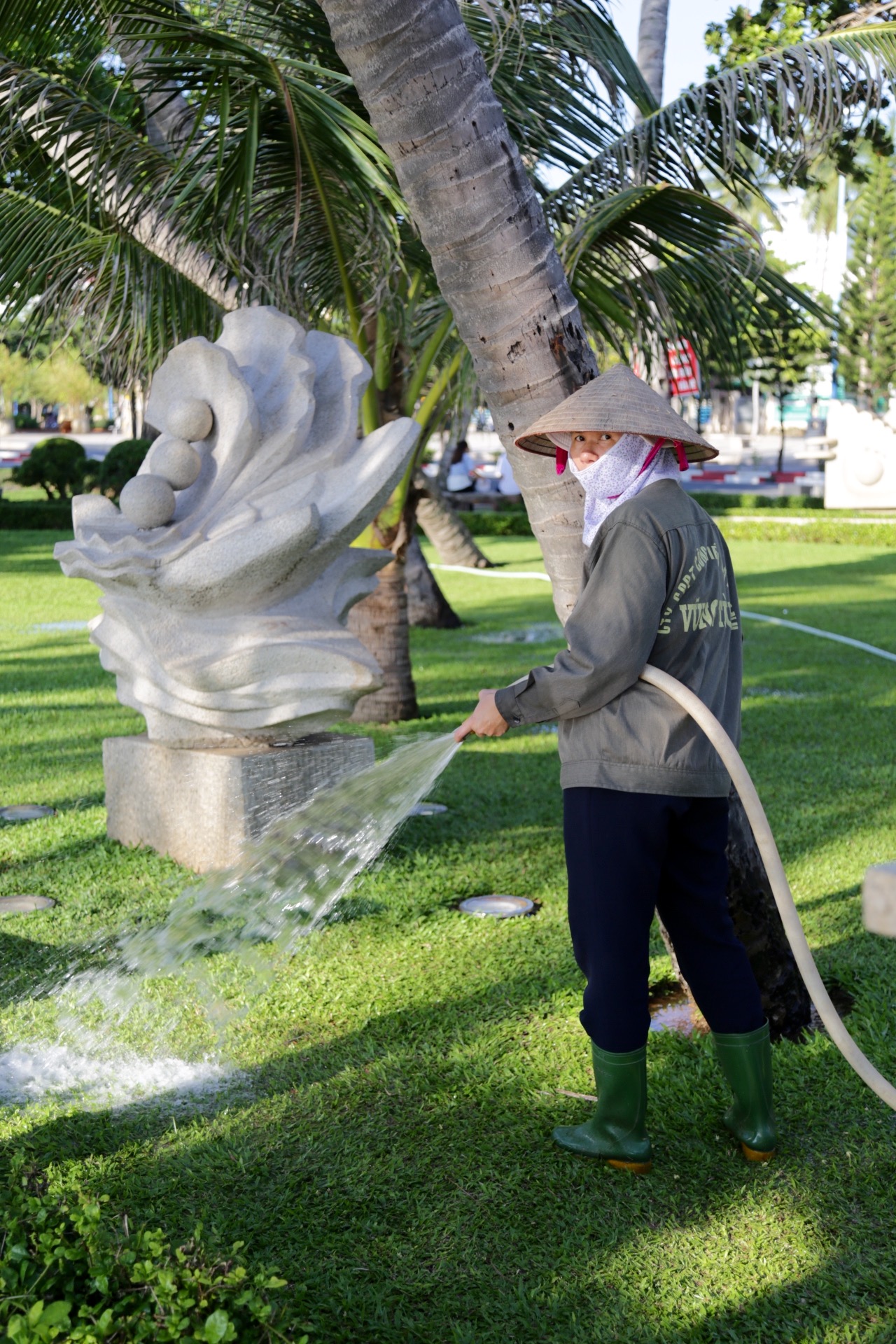 After exploring the main points of Vũng Tàu, we went towards Bãi Dau, characterized by its genuine picturesque style. 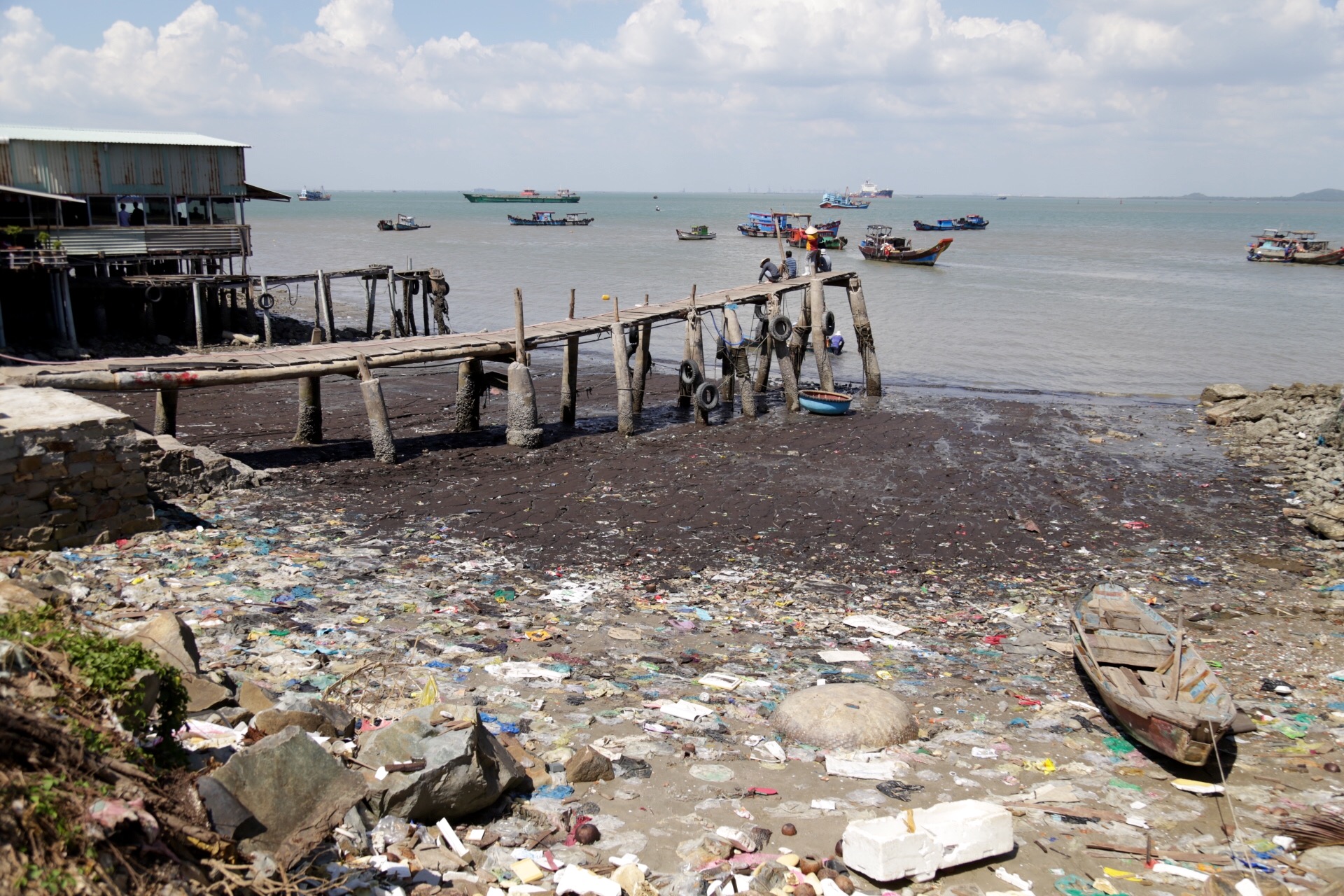 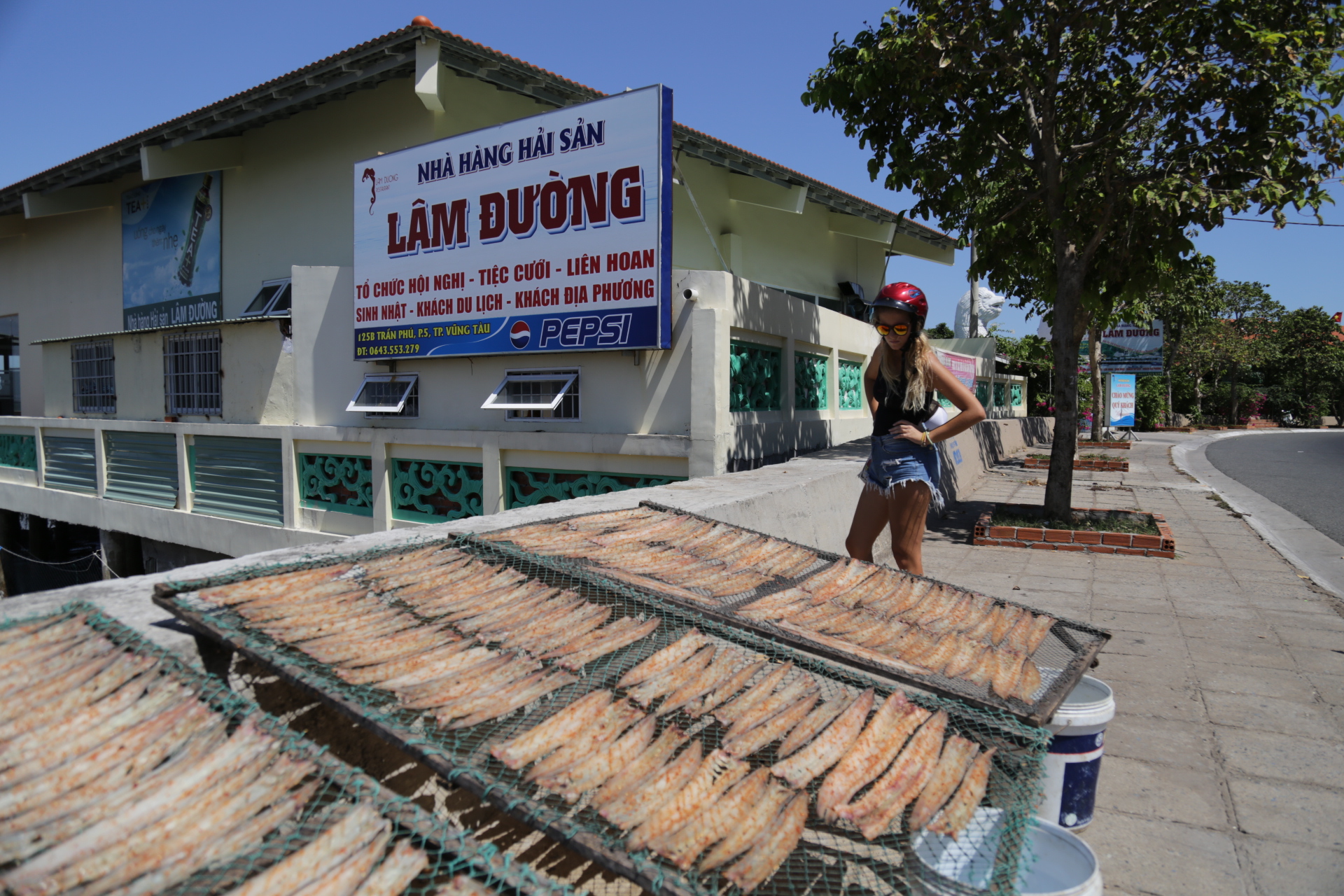 One day was more than enough to see all the city, so on the next day instead of going to the beach we found the perfect swimming pool where we had a great time. 😀 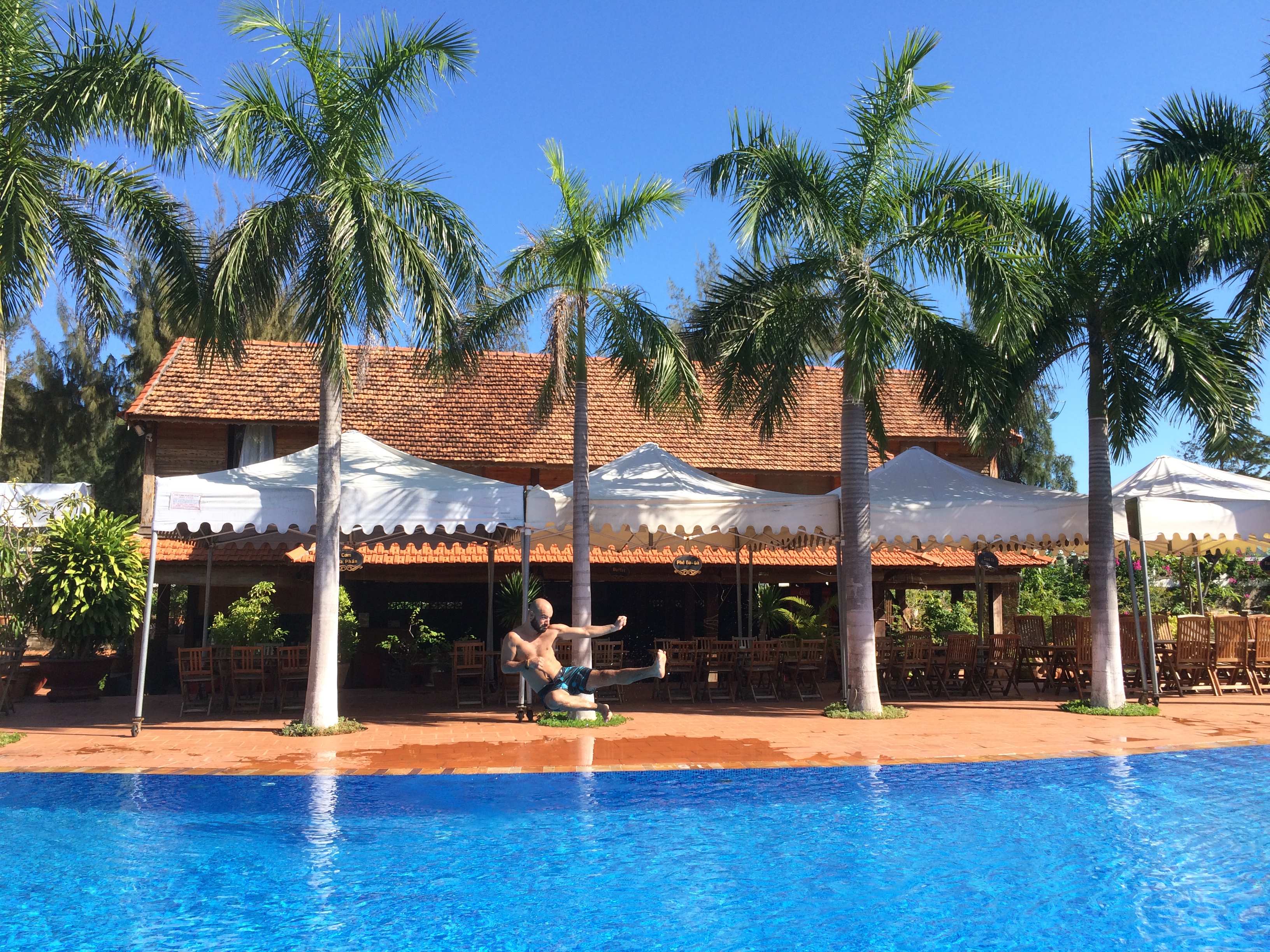 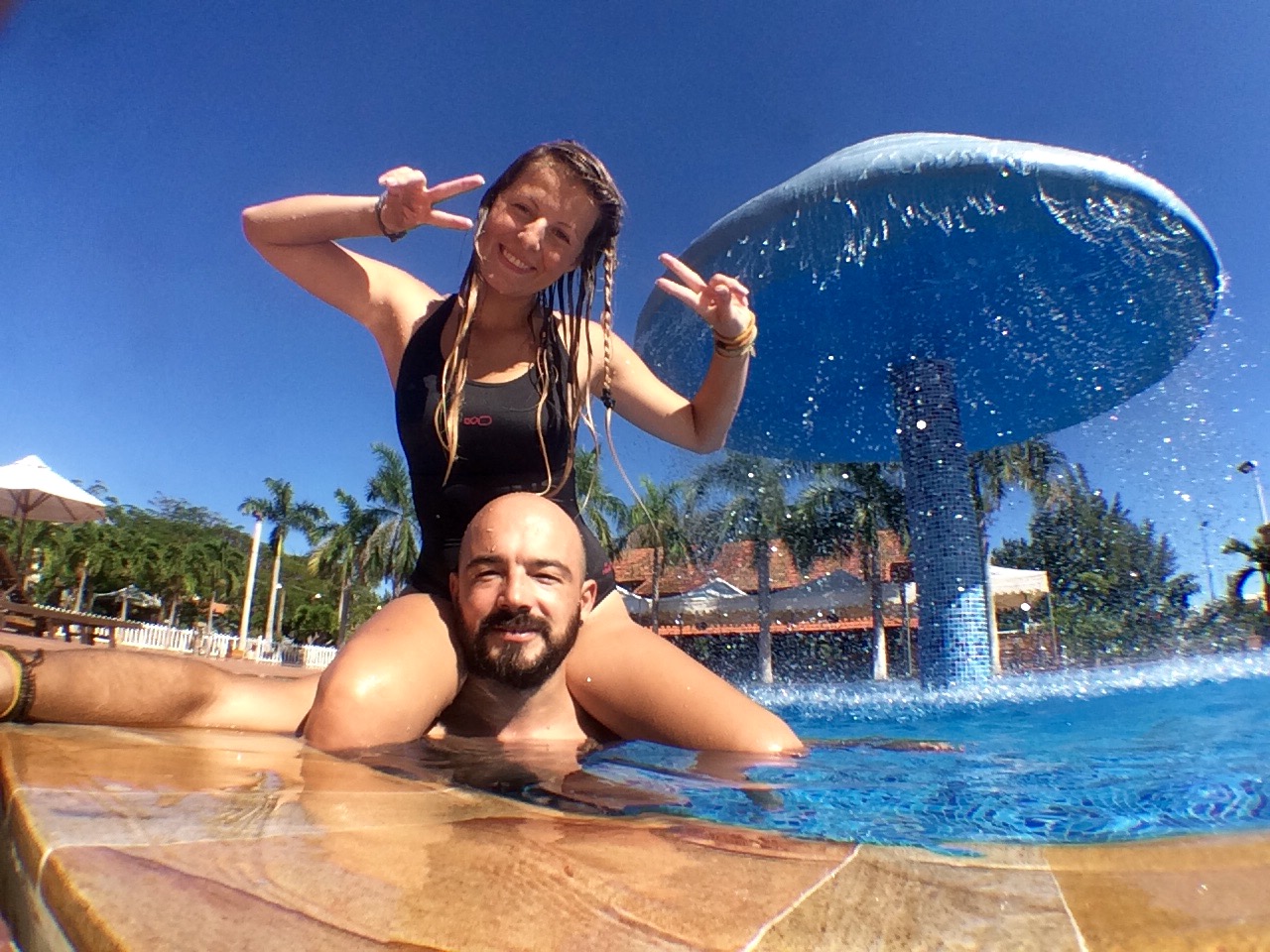 Our next destination was Mũi Né, a coastal resort town in the Bình Thuận Province of the Southeast region of Vietnam and one of the most popular destination for Russian tourists. For us, one of the best places where we ate fresh and cheap seafood since the beginning of our travel. 🙂

We stayed in Quóc Dinh Guesthouse a budget place right next to the beach. The room was cozy and the Vietnamese family running the place was very friendly. Unfortunately the beach was not what we had in mind but later on we found a windy deserted clean beach where we spent almost all our afternoons. We were needing it. 😜 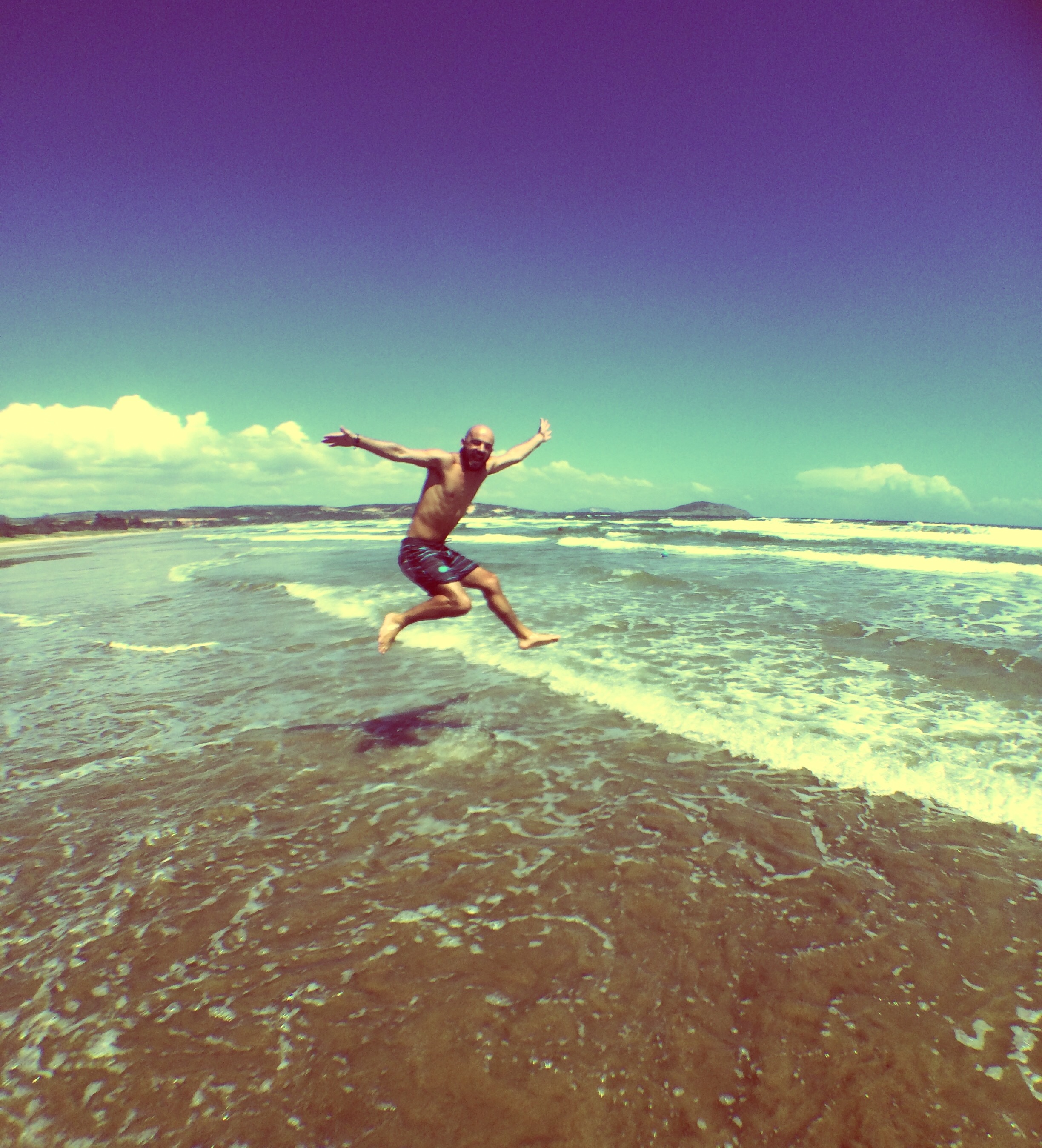 Next morning we bought a tour through all the “must see” of Mūi Ne. Our Jeep was waiting at 5 AM to take us to the White Sand Dunes from where we could appreciate the sunrise. From one side the desert and the other the Lotus Lake. Just spectacular! 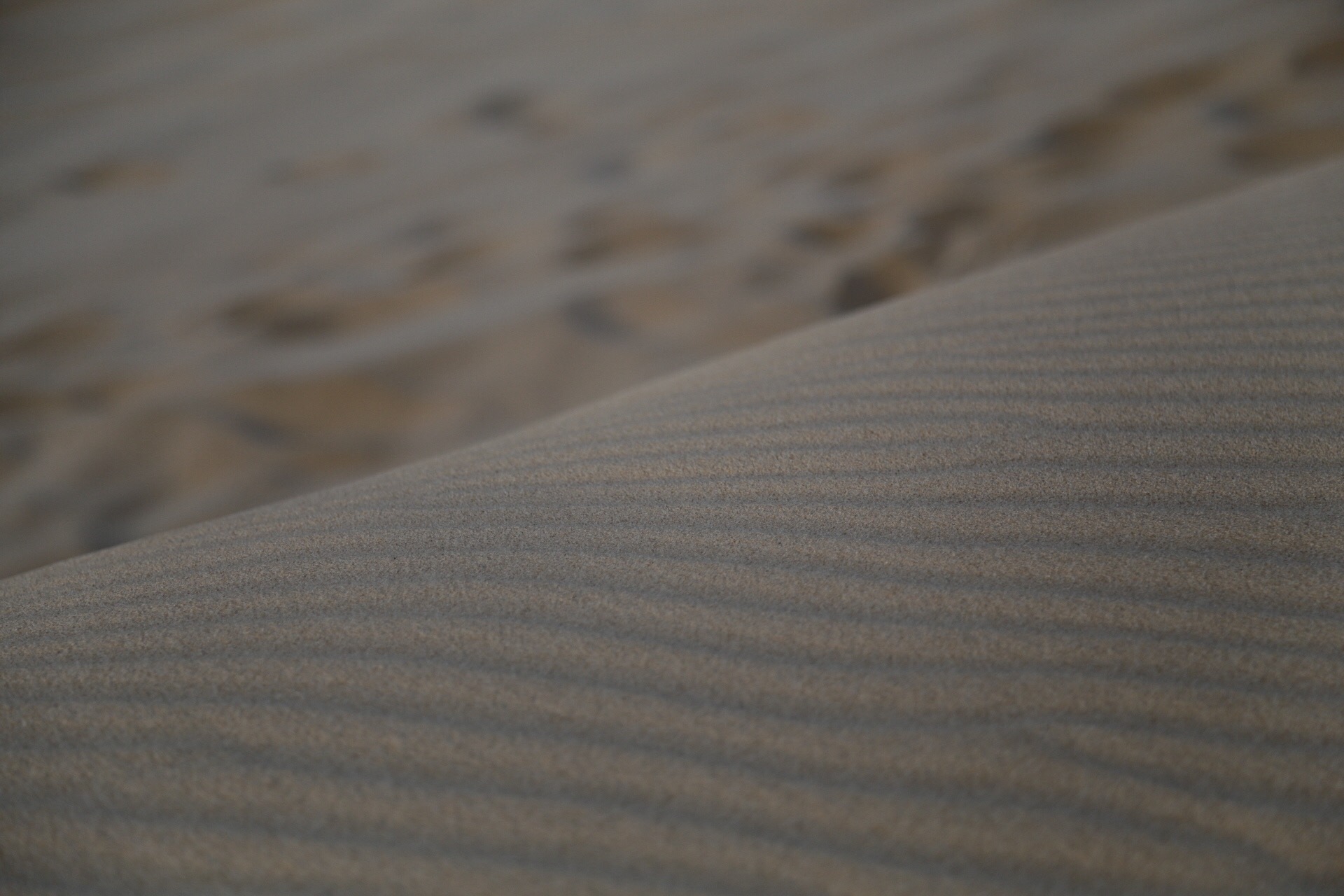 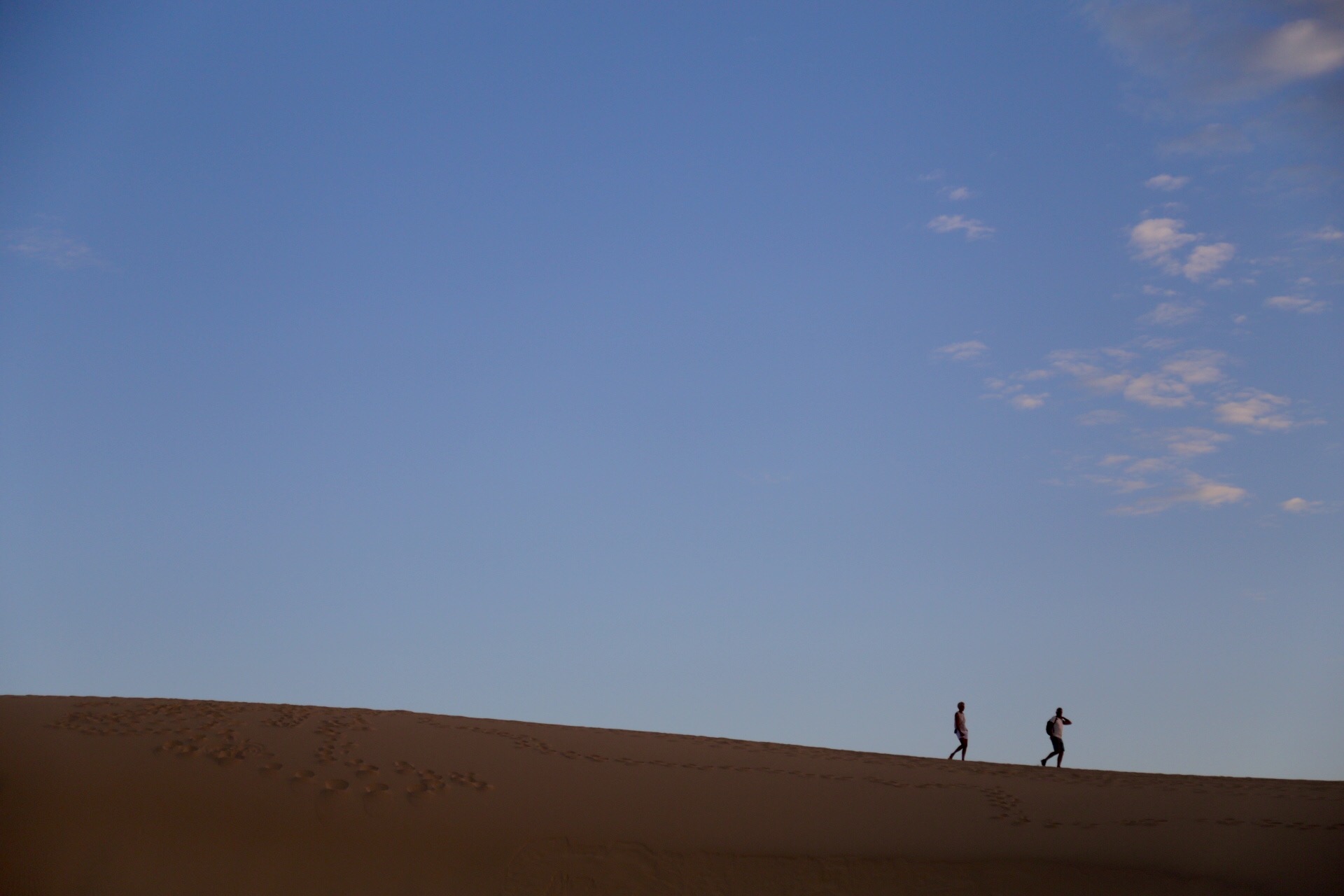 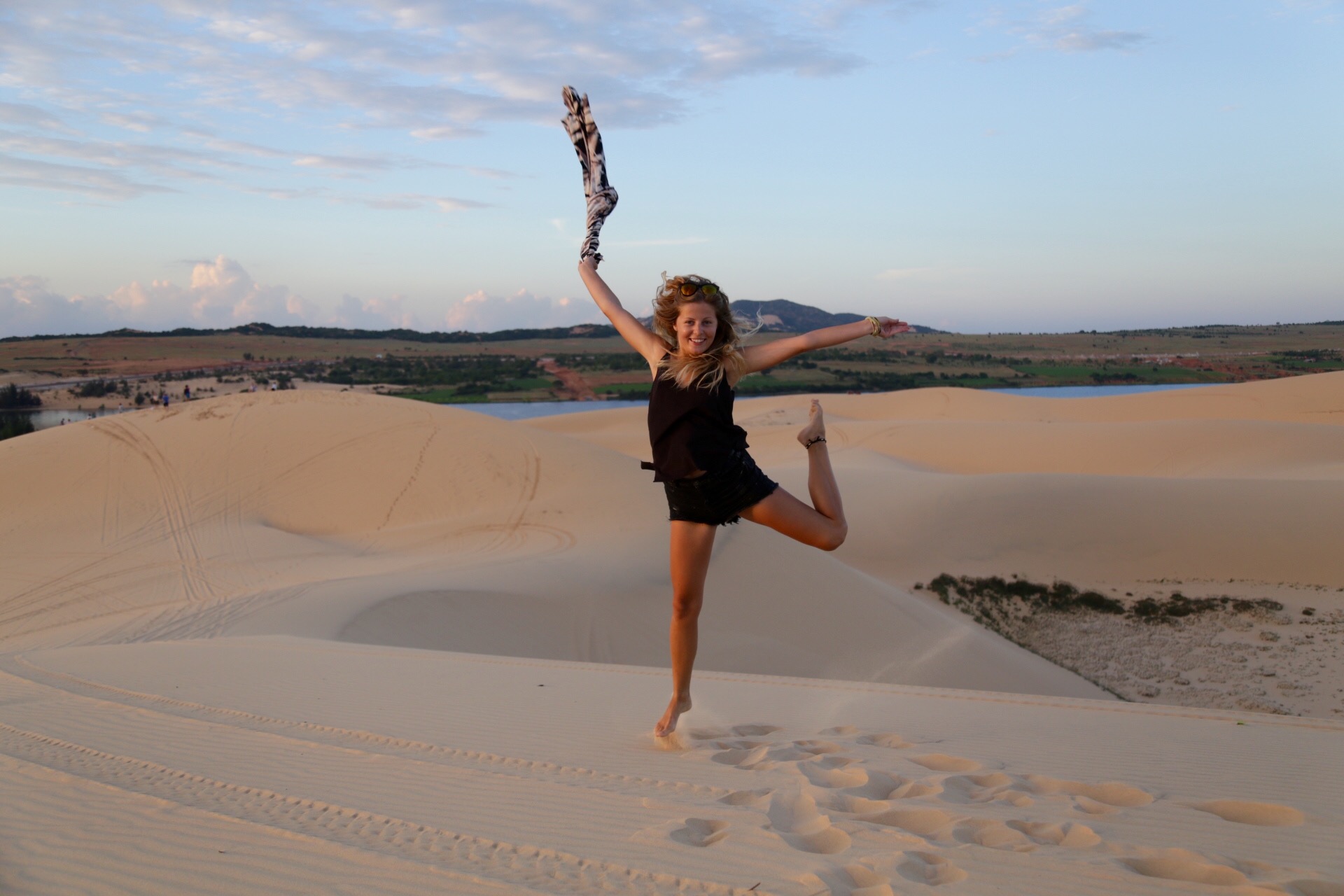 You can rent a quad bike to go up the dunes but we chose to climb it cause they were noisy and would ruin all the atmosphere. 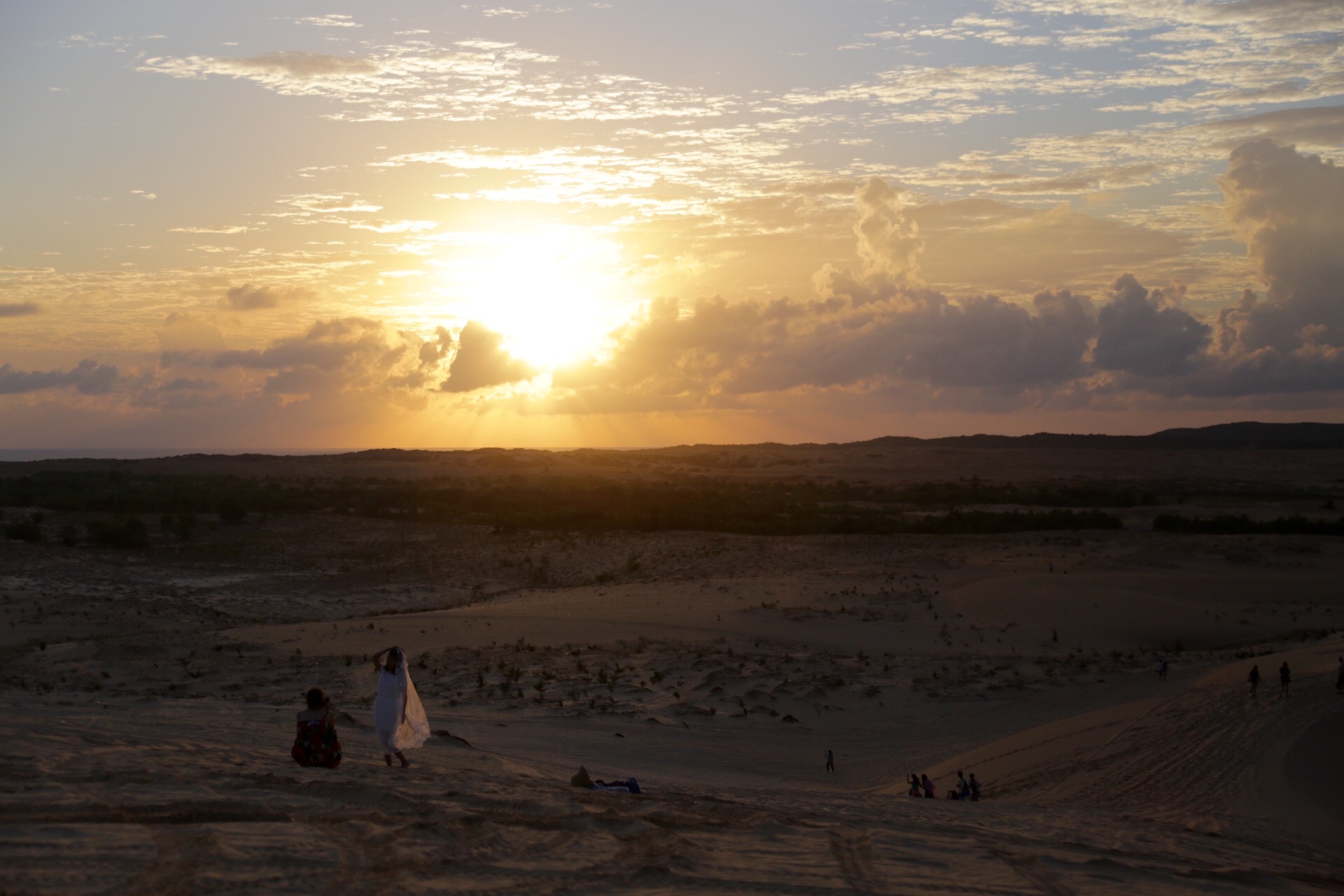 After a little breakfast that we brought with us, we were on the way to the Red Sand Dunes. Not so amazing as the first one but still, unexpected. 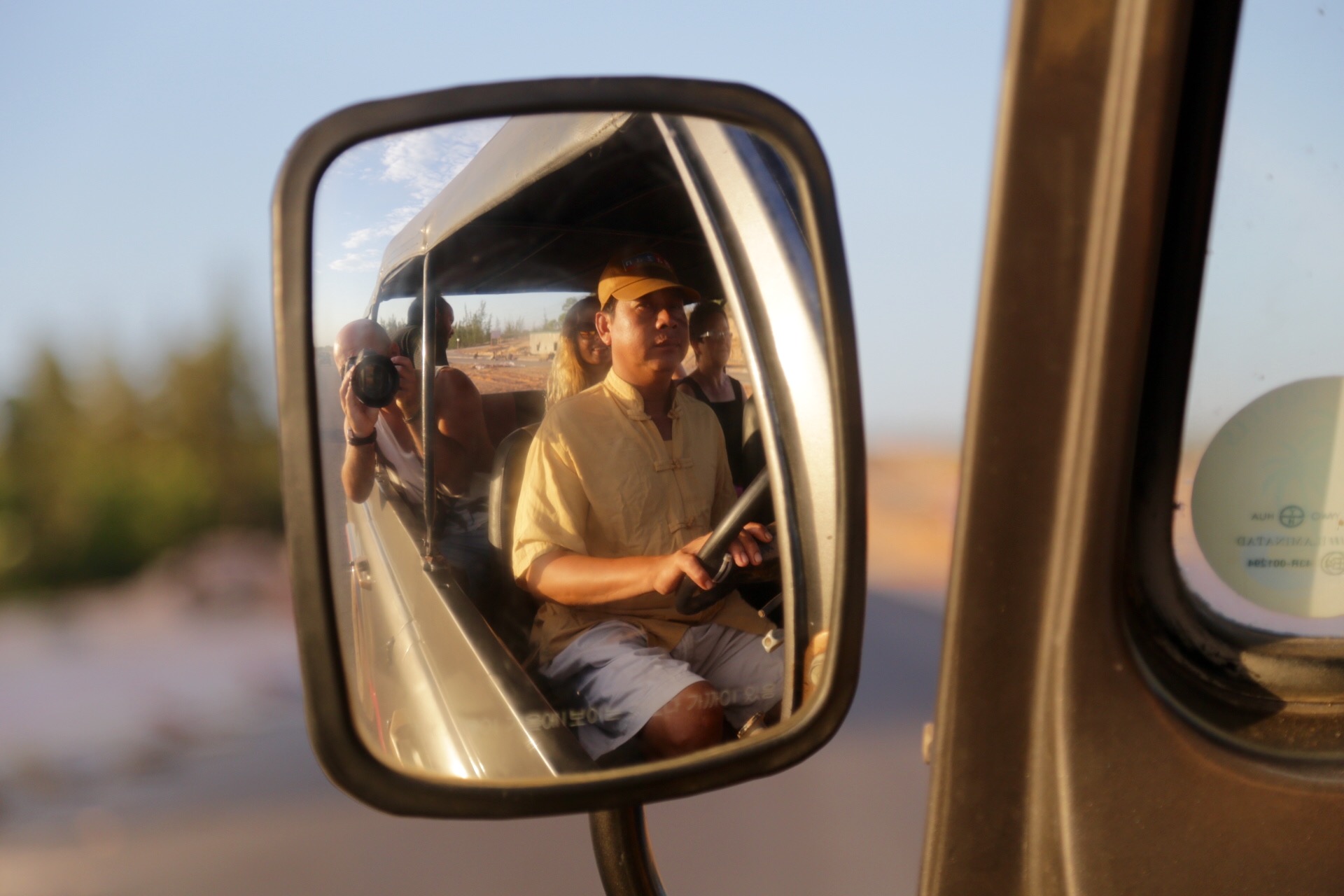 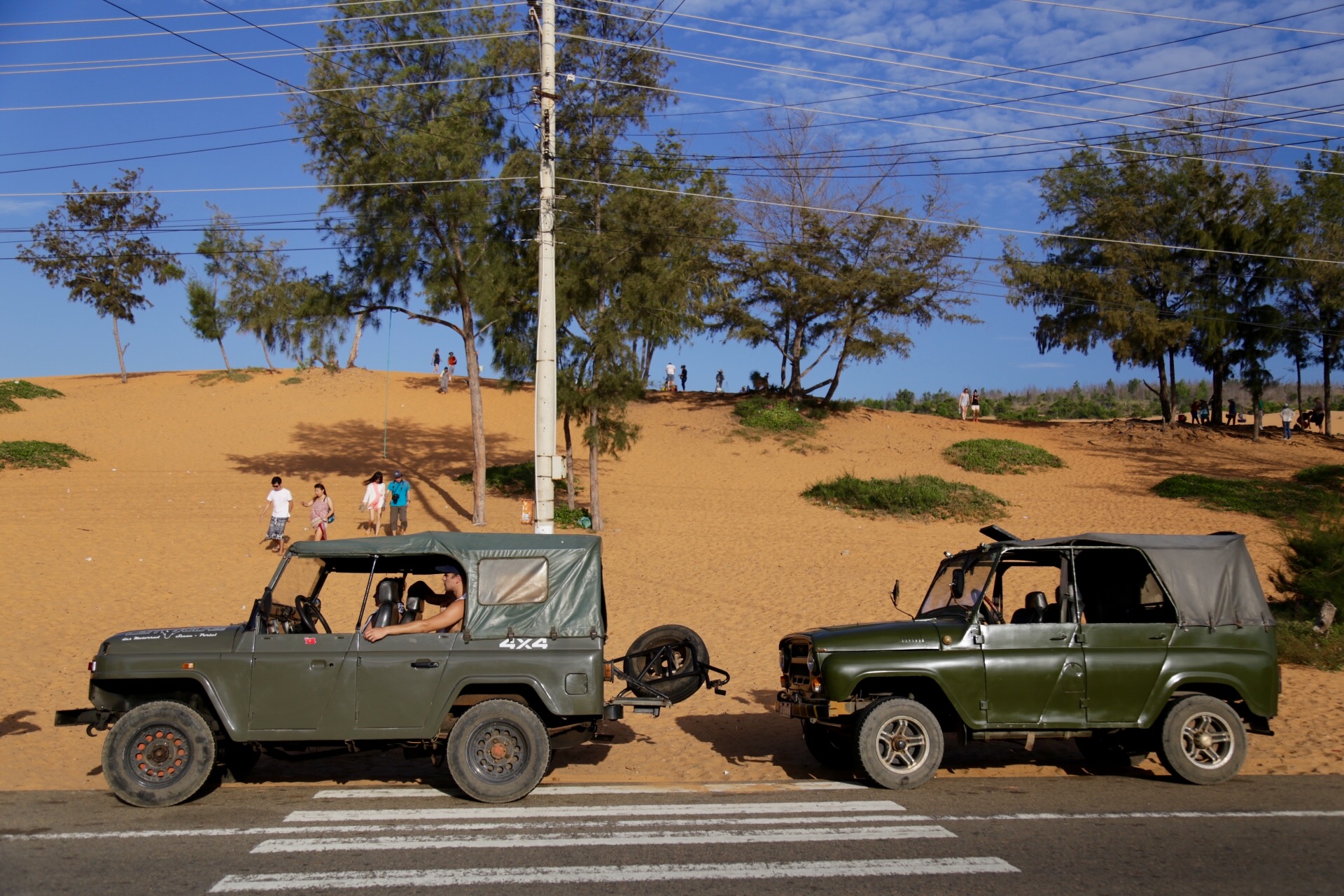 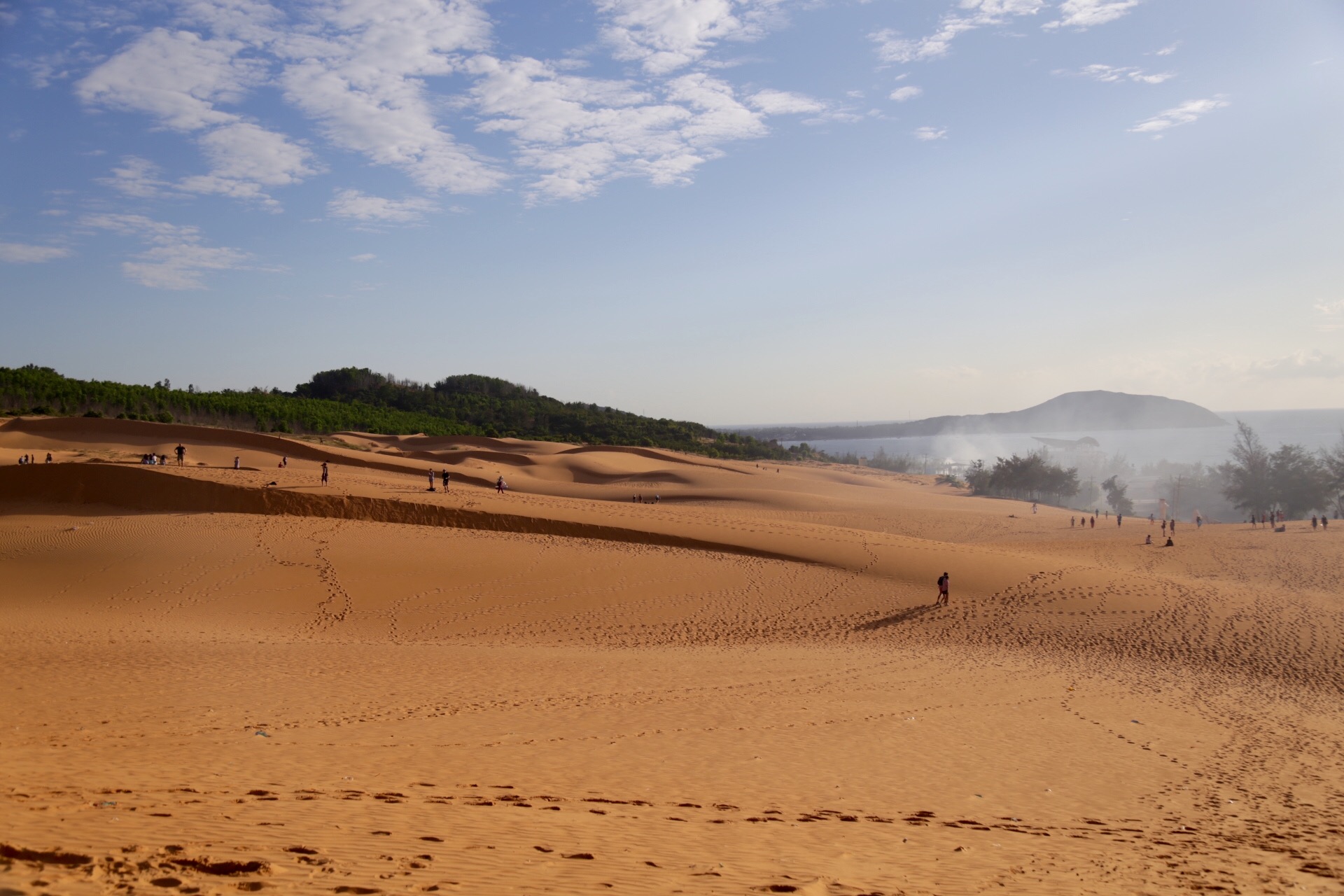 If you have never been in the desert, it’s a great opportunity to experience one! The dunes are not so big, but big enough to enjoy the sunset and to make nice pictures.

After a sandy stopover we passed by the Fishermen’s Village just after they return from the sea. A kind of a beach fair with locals on their daily routine carrying and selling all sort of seafood than you could possibly imagine. It was such a charming and authentic place that we return before dusk. 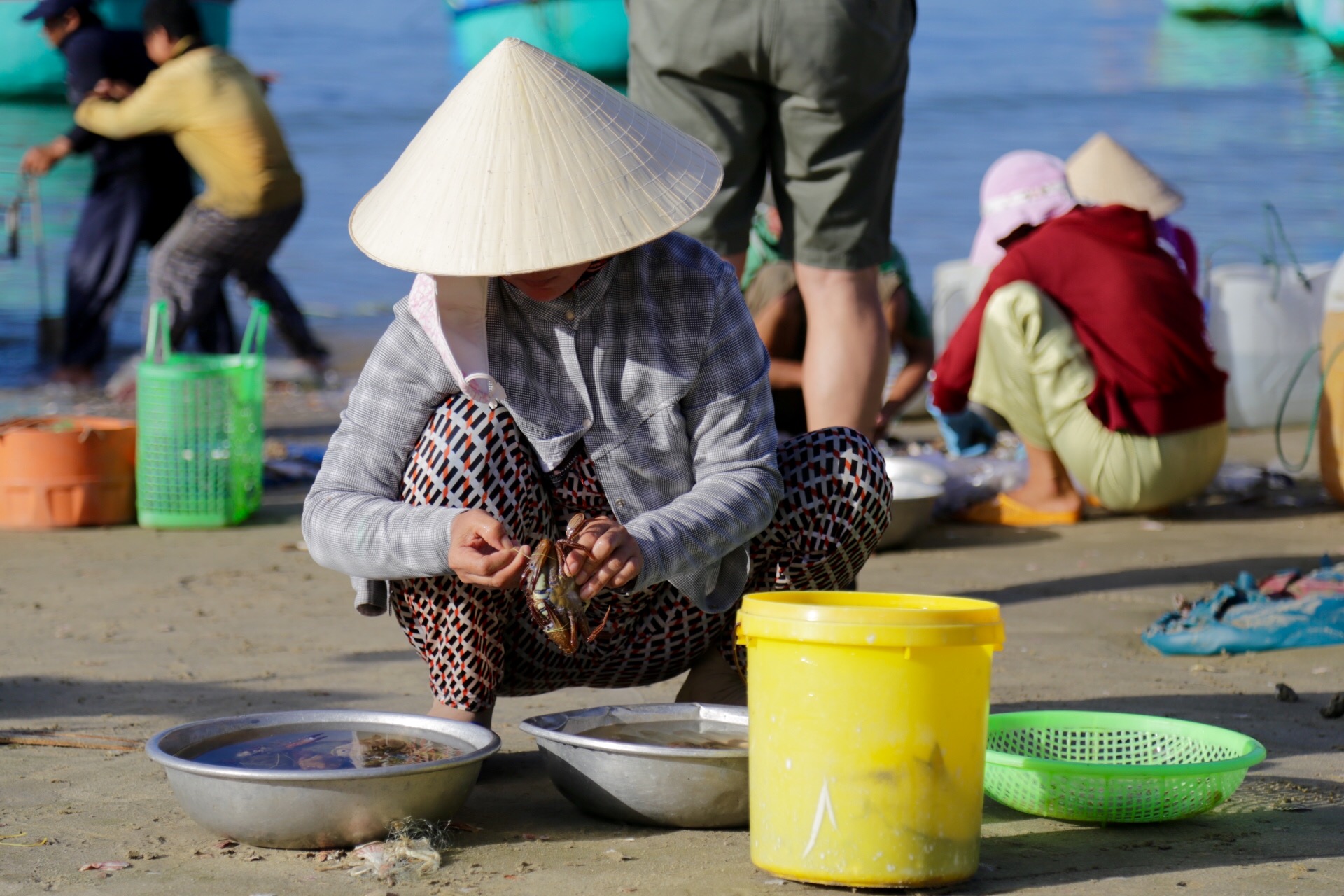 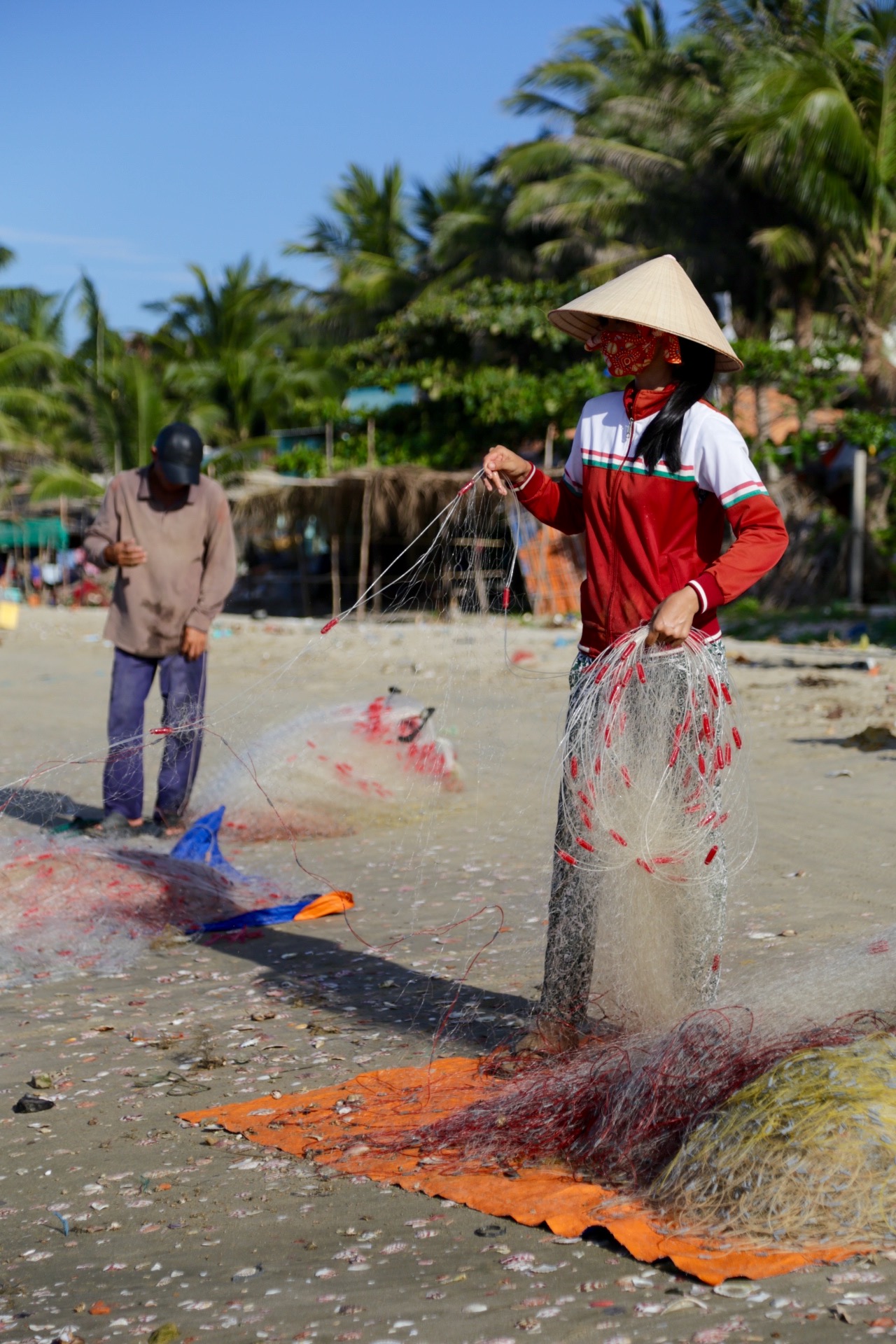 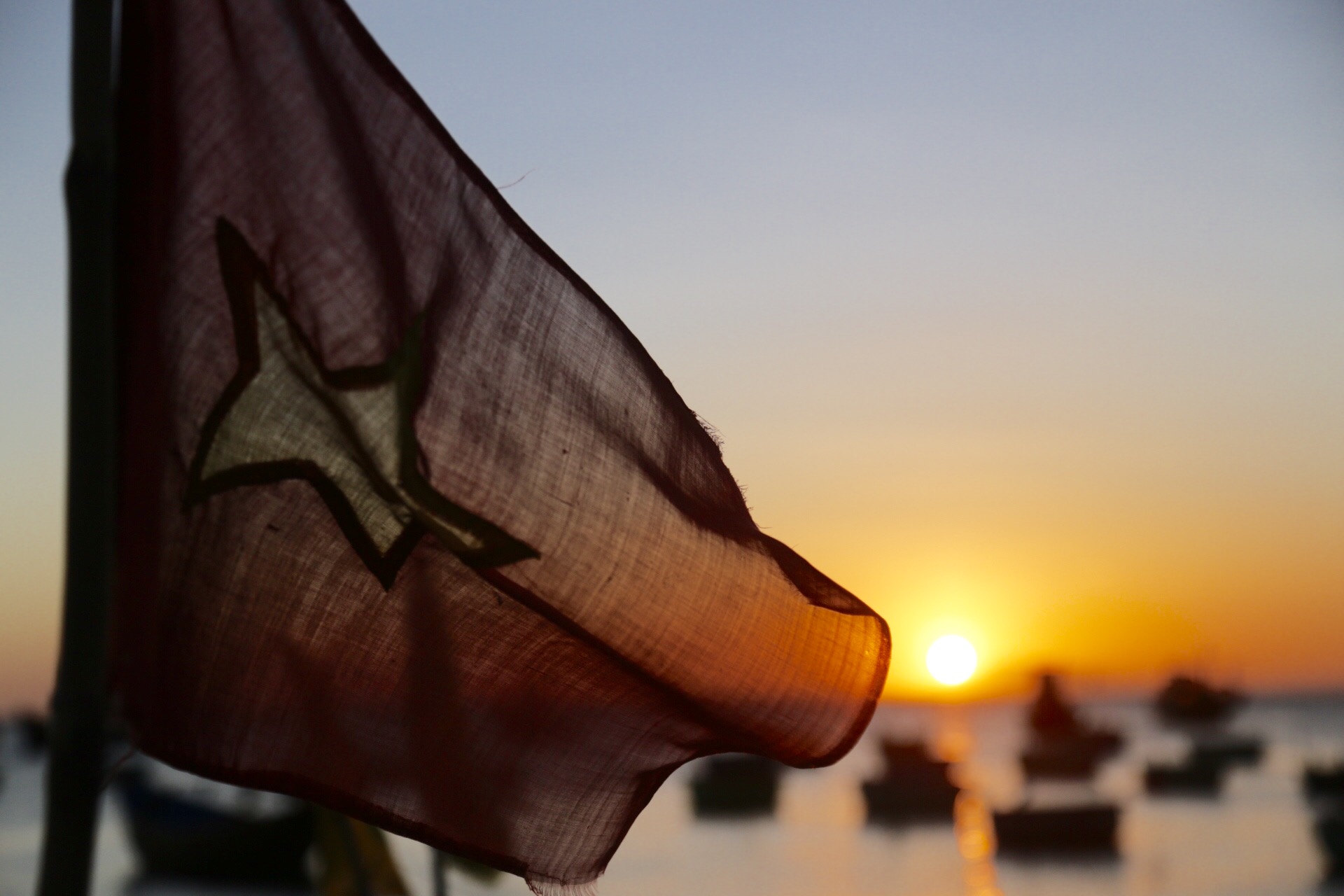 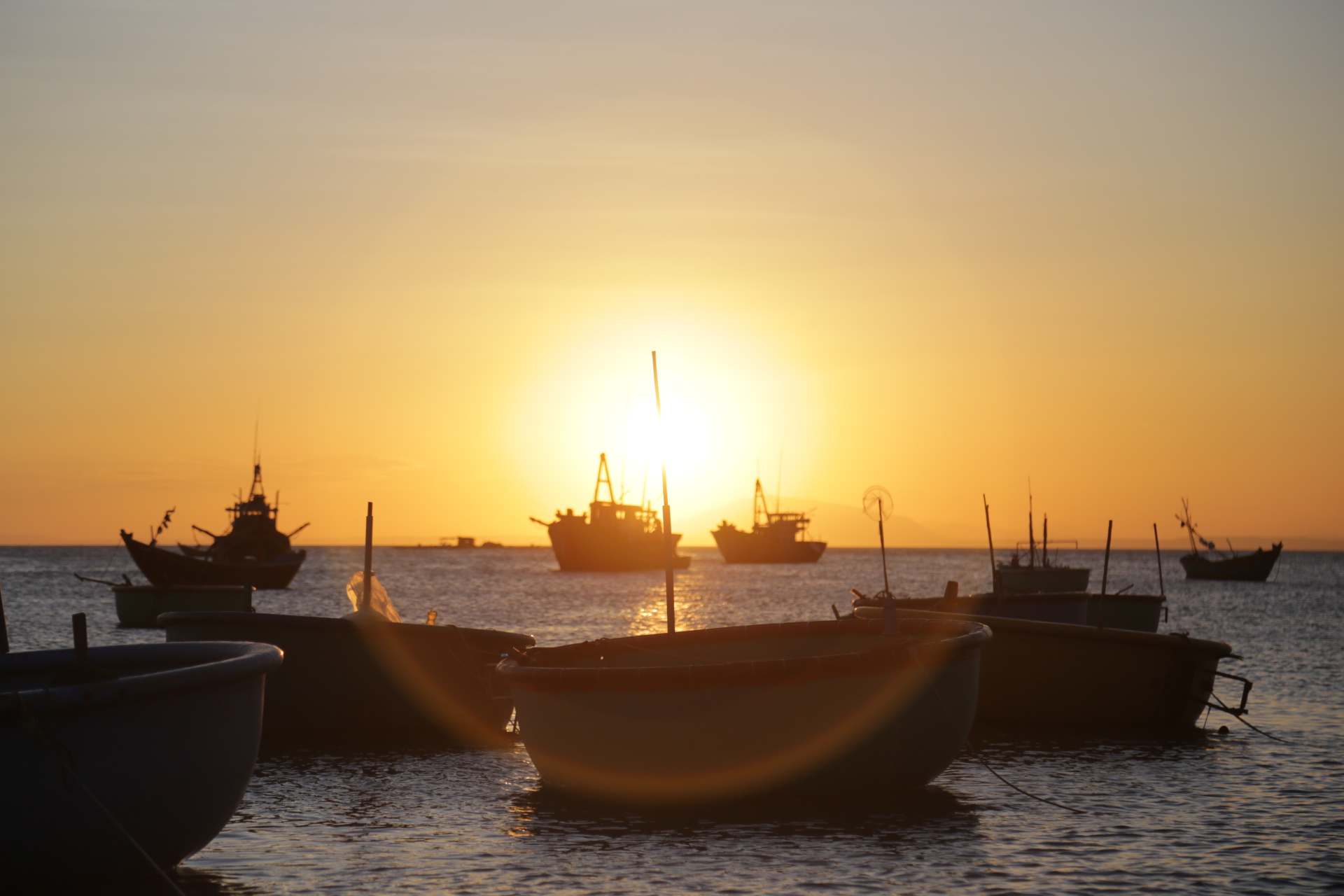 The last attraction was the Fairy Stream, a kind of rocks form similar to Cappadocia in Turkey. The Soft red creek is colored by the clay and limestone particles that filter in from the strange rock formations at its shores. 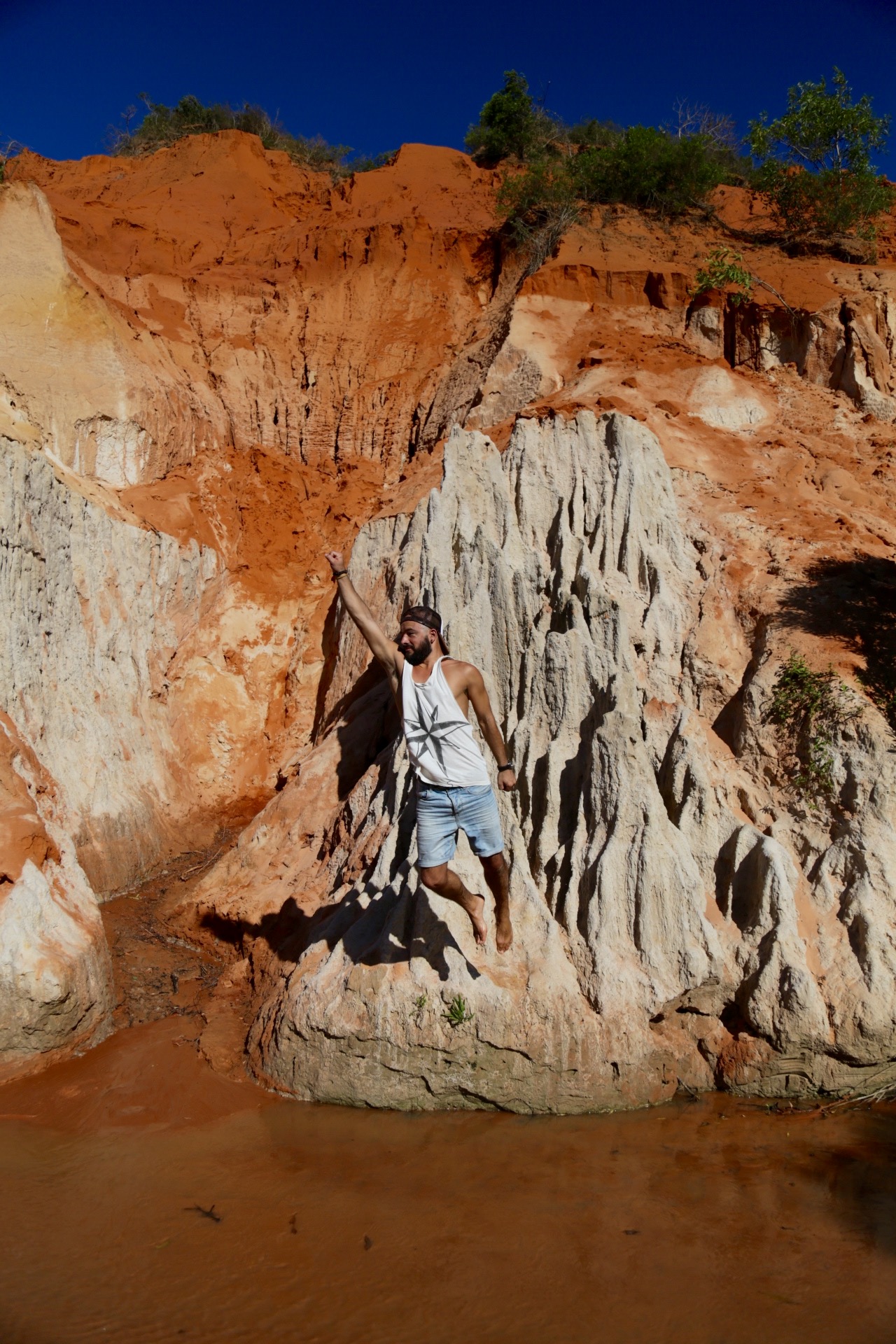 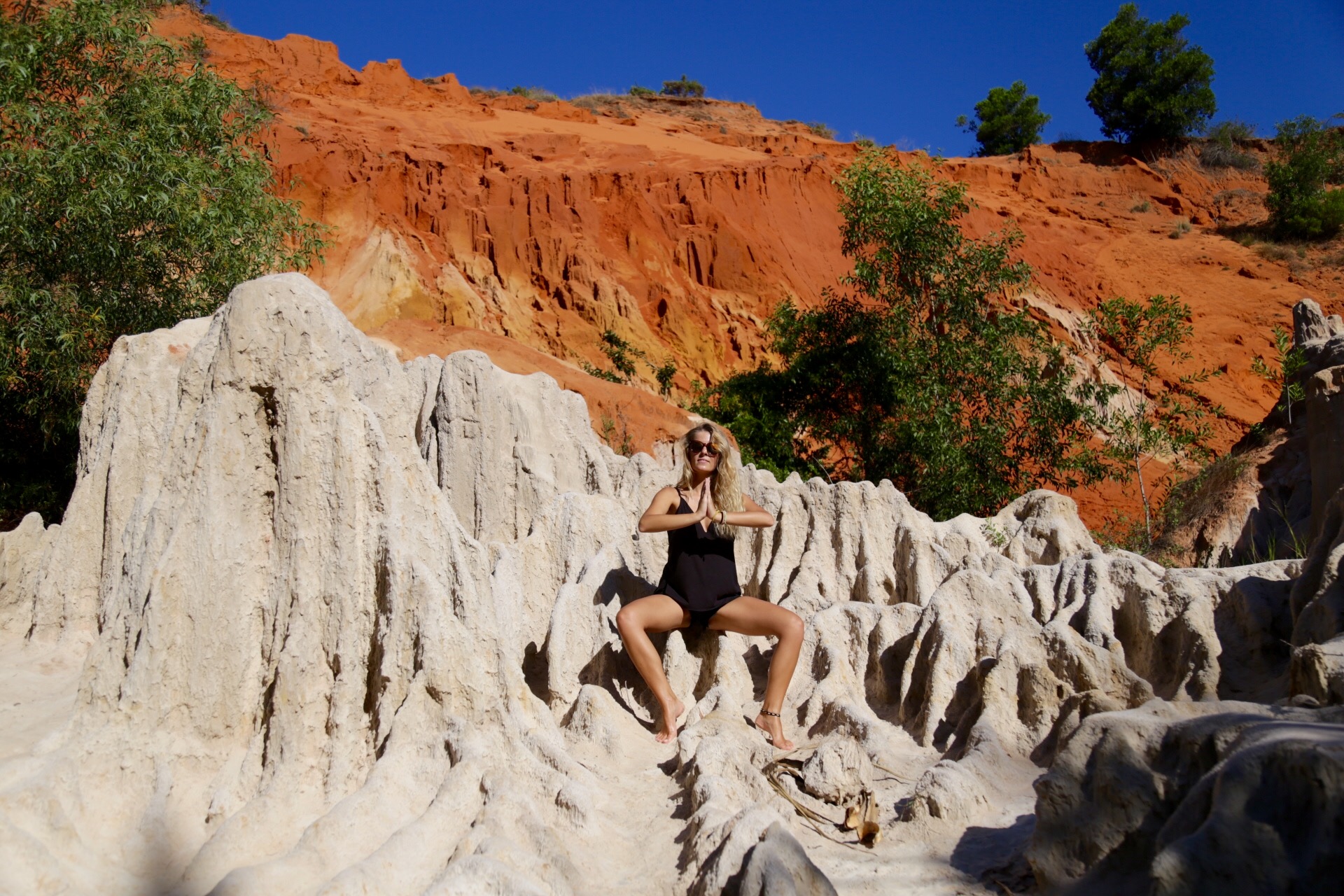 The tour cost us $6 each and we truly recommend you to do it if visiting Mūi Ne 🙂 In case that you are not so into this kind of tours, it is also quite doable by motorbike. The way to get to the white dunes is not as hard and long as some travel bloggers describe it.

What was going to be hard and long was the way to our next destination, 15 hours inside of a sleeping bus to Hoi An!