On the following days, we visited Ngoc Son, the Temple of the Jade Mountain. The most visited temple in the city, located on a small island in the northern part of Hoan Kiem Lake, connected to the lakeshore by a wooden red bridge, constructed in classical Vietnamese style. It was built in commemoration of the 13th-century military leader Tran Hung Dao who was renowned for his bravery in the battle against the Yuan Dynasty. 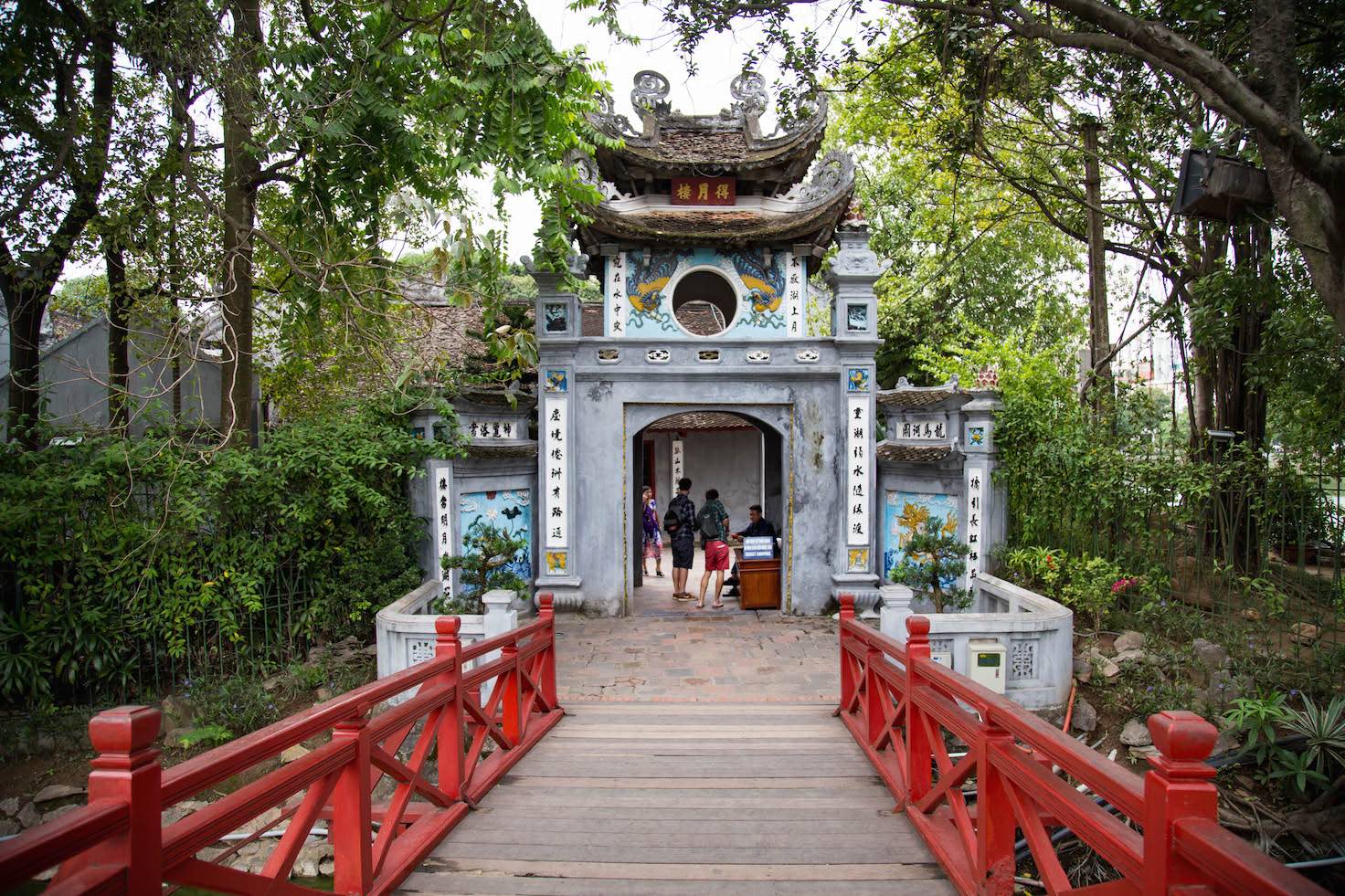 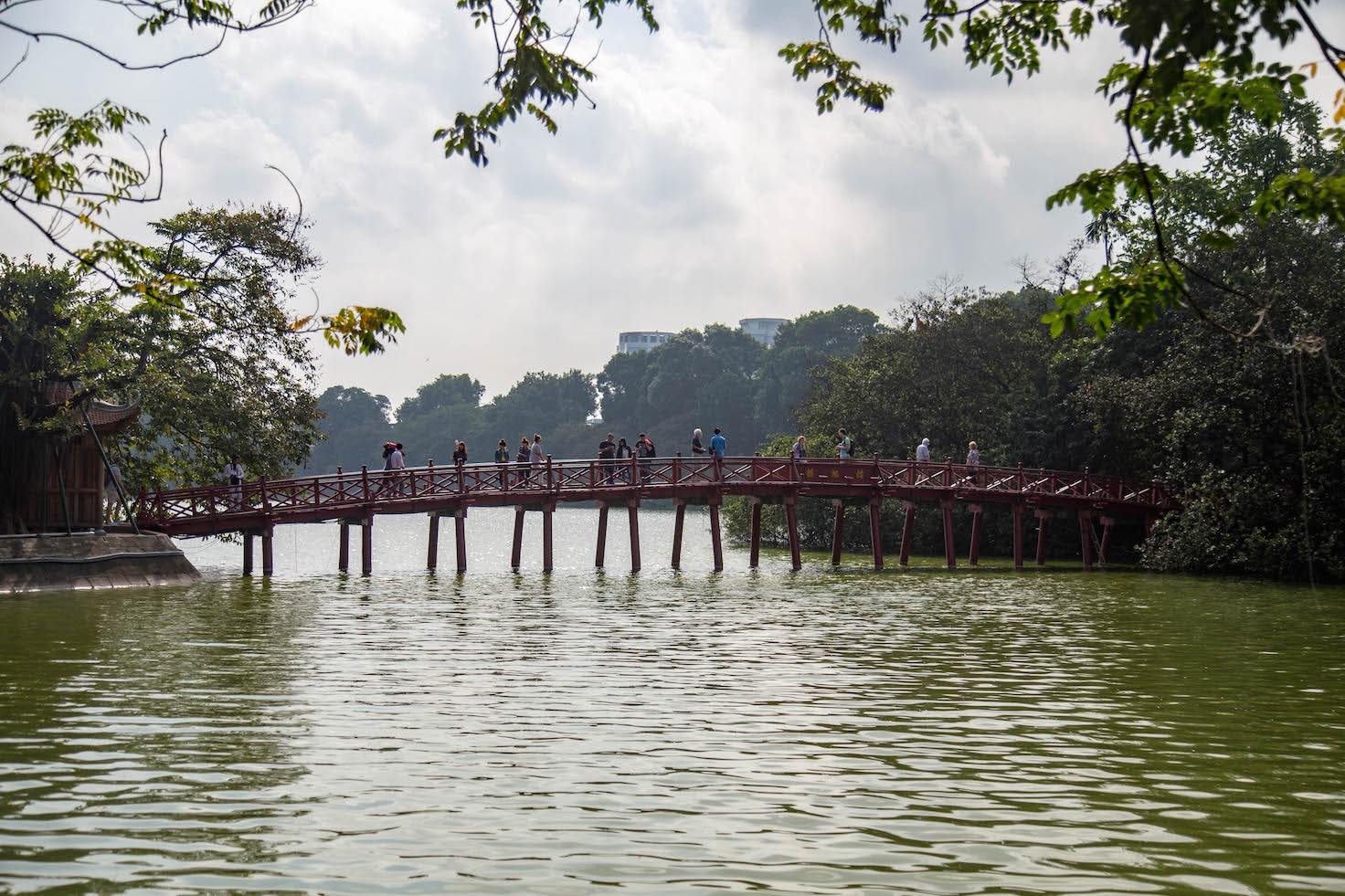 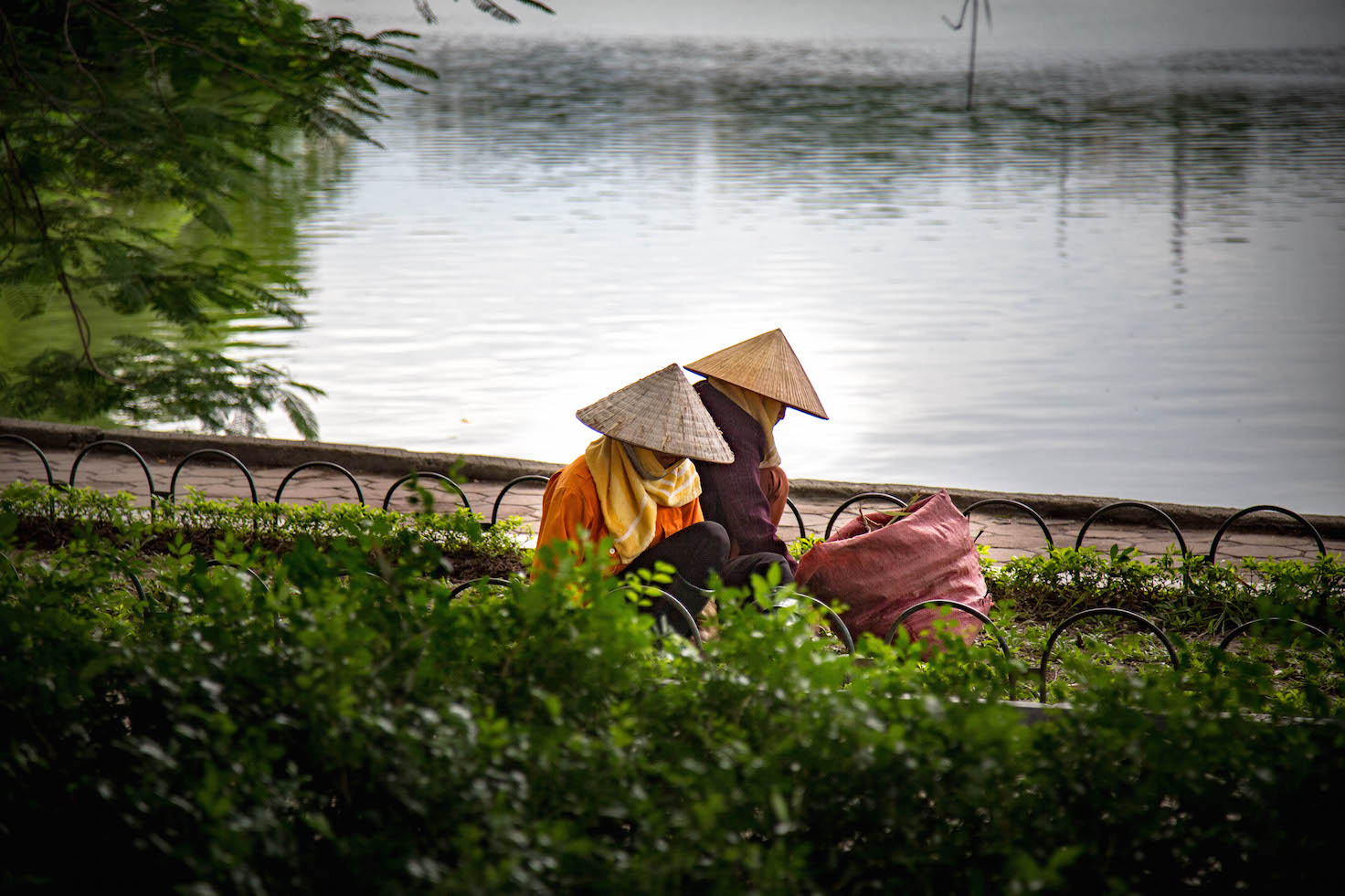 Lenin Park “Thong Nhat” covers an area of 50 hectares in Hai Ba Trung district and is a great spot to relax or enjoy a stroll without having to avoid Hanoi’s motorbikes and street vendors.

Dong Xuan Market originally built by the French, is the biggest shopping point in the Old Quarter where the wholesale traders sell everything from clothes, souvenirs, household goods to foodstuffs. Outside, hundreds of stalls with fresh seafood, herbs, fruits, people doing shopping without going out from their motorbikes, women cutting alive fishes for customers and chickens running between all of that, impossible to describe the quantity of things happening there. What a chaotic and busy street, definitely worth to visit. We guarantee you an authentic experience and a moment of yūgen. 😉 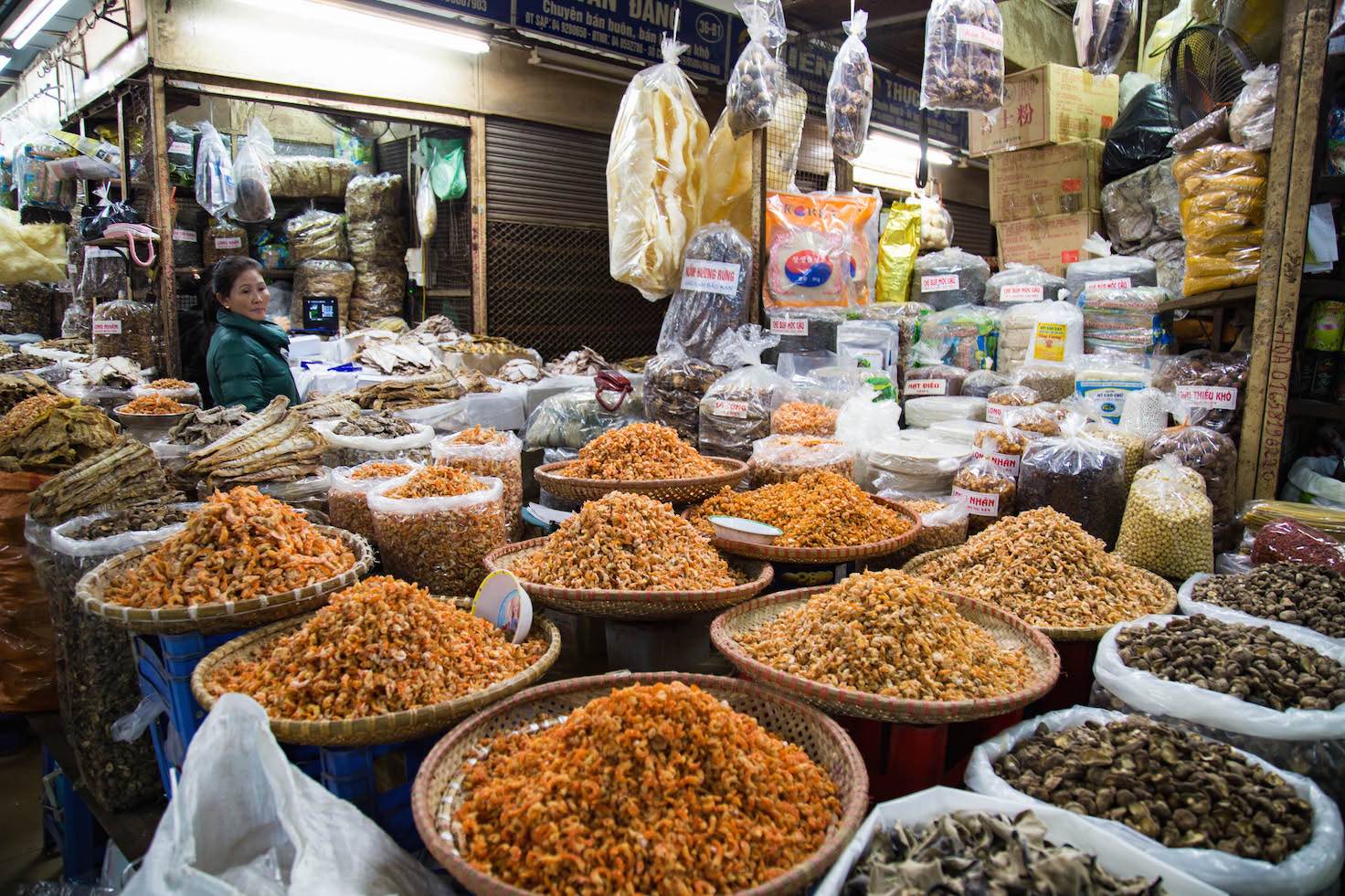 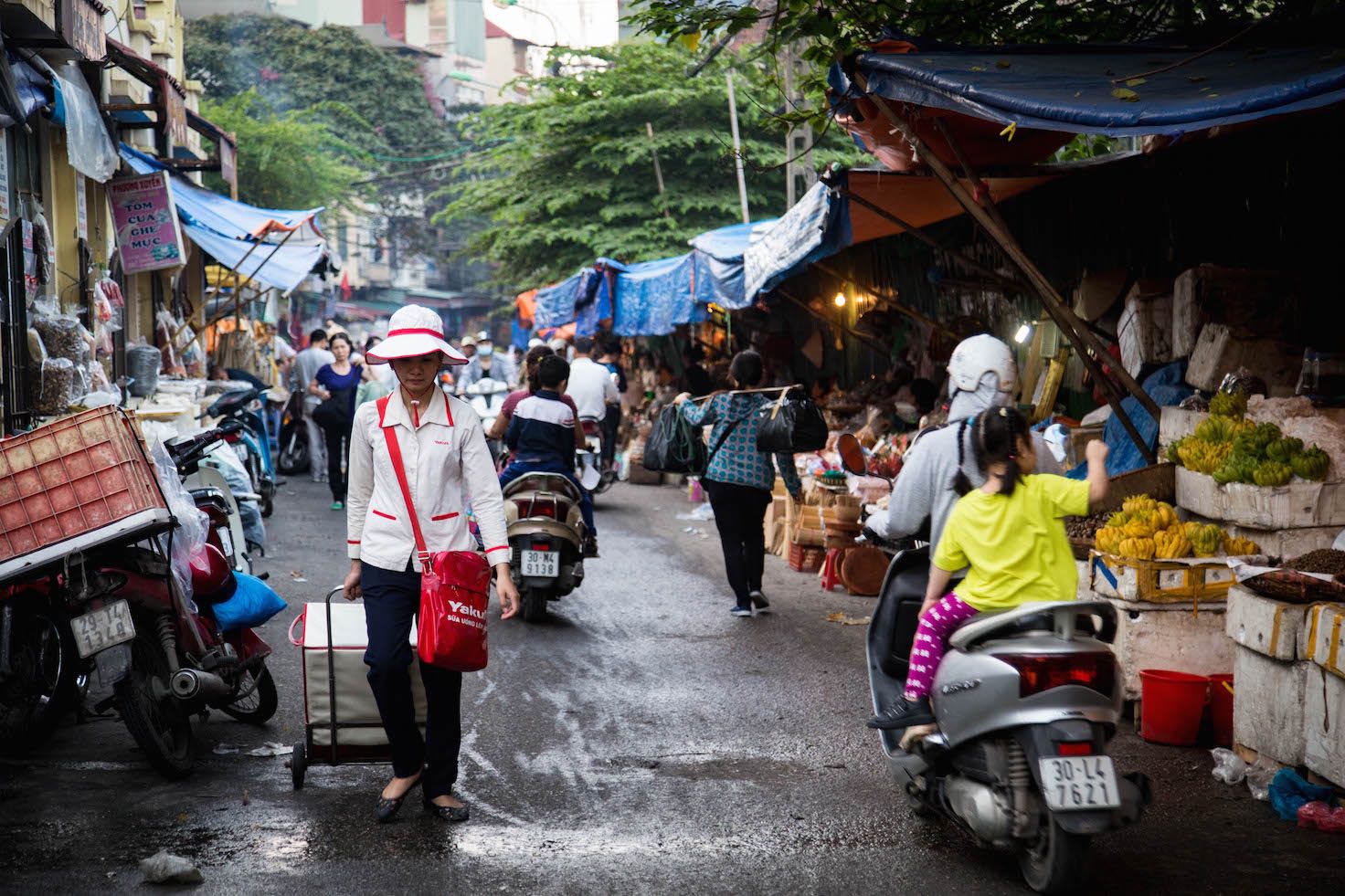 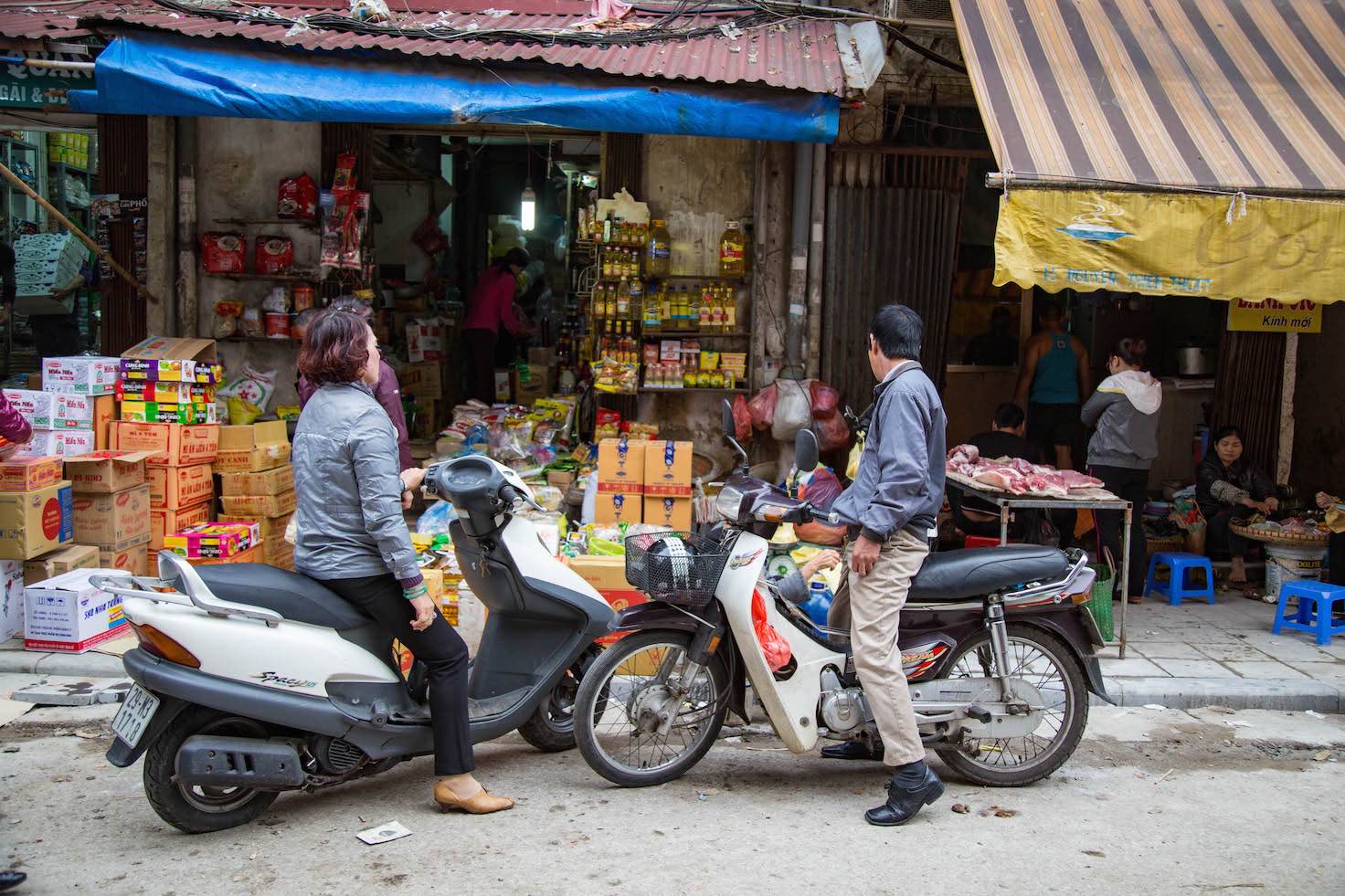 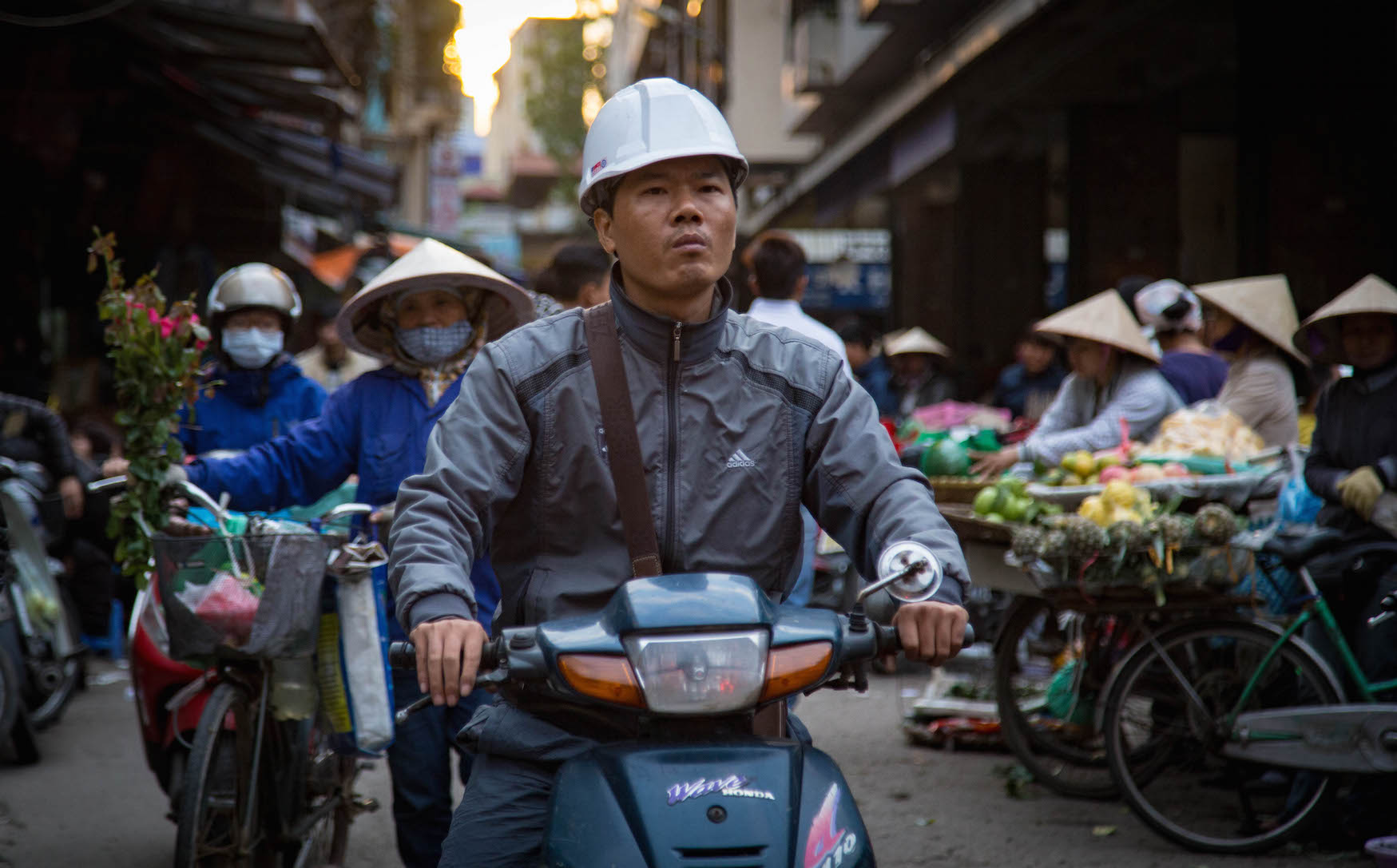 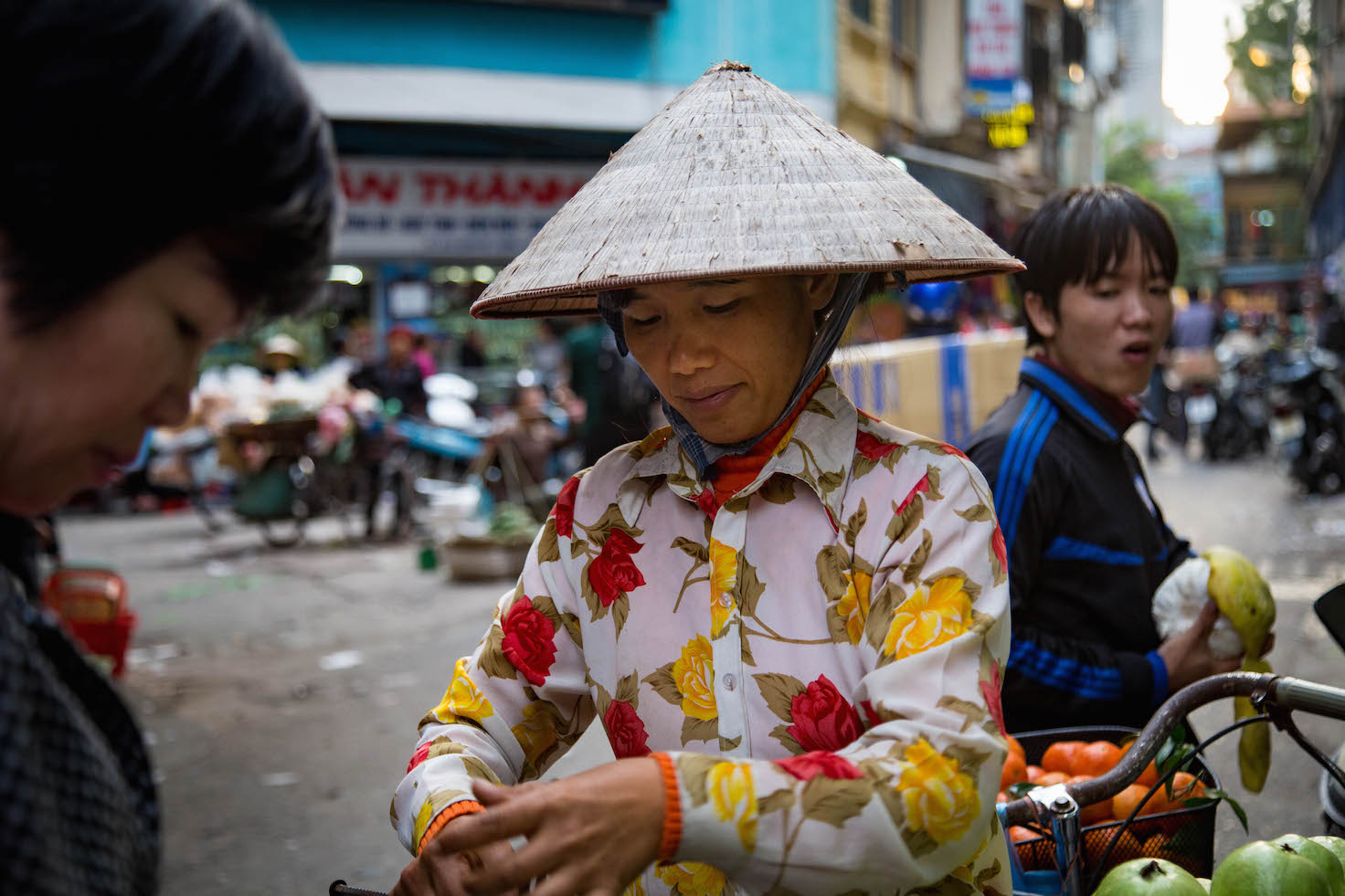 To end our long day, a beer on the rooftop bar was the best idea to chill out after such a journey of senses. 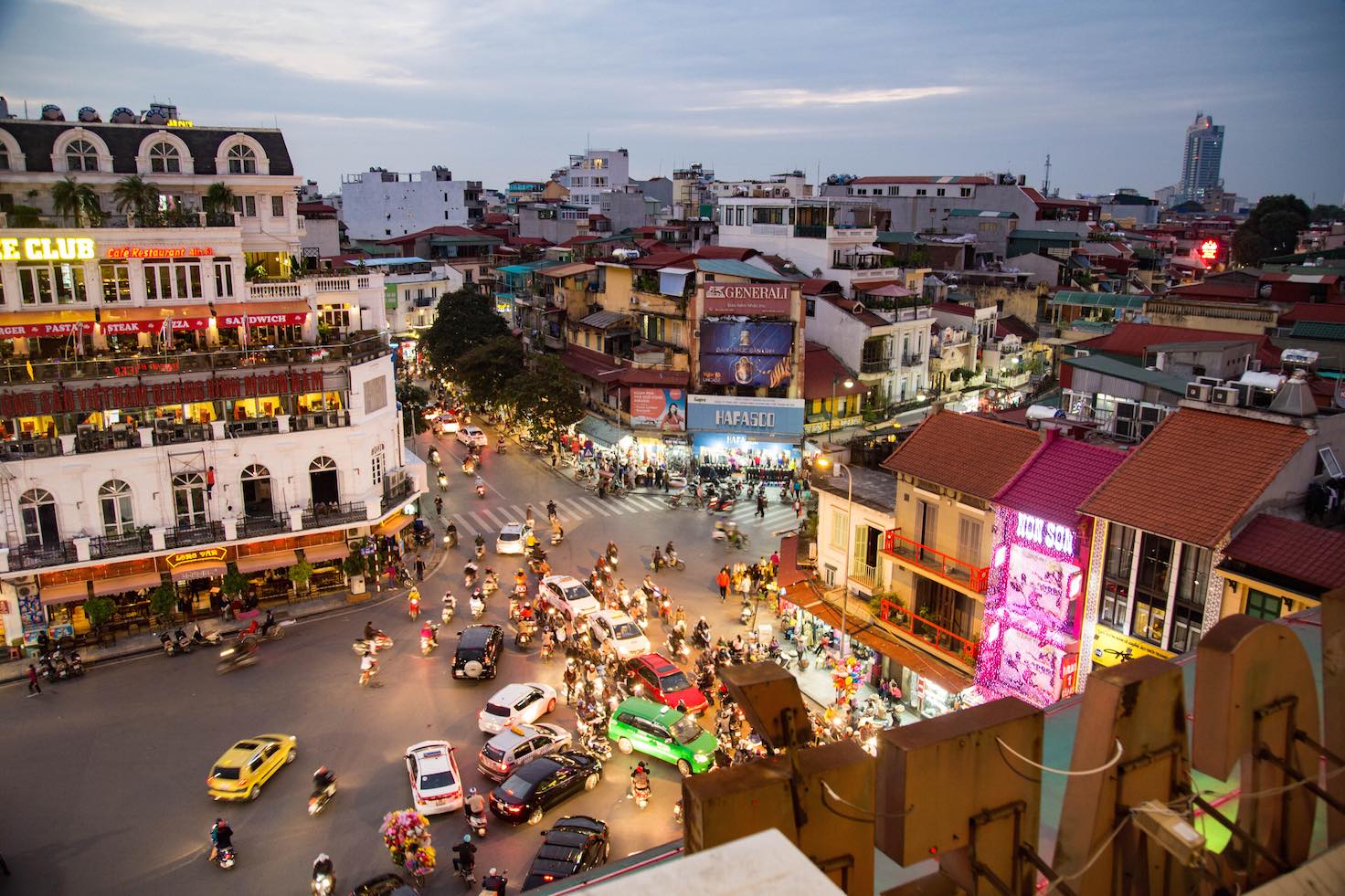 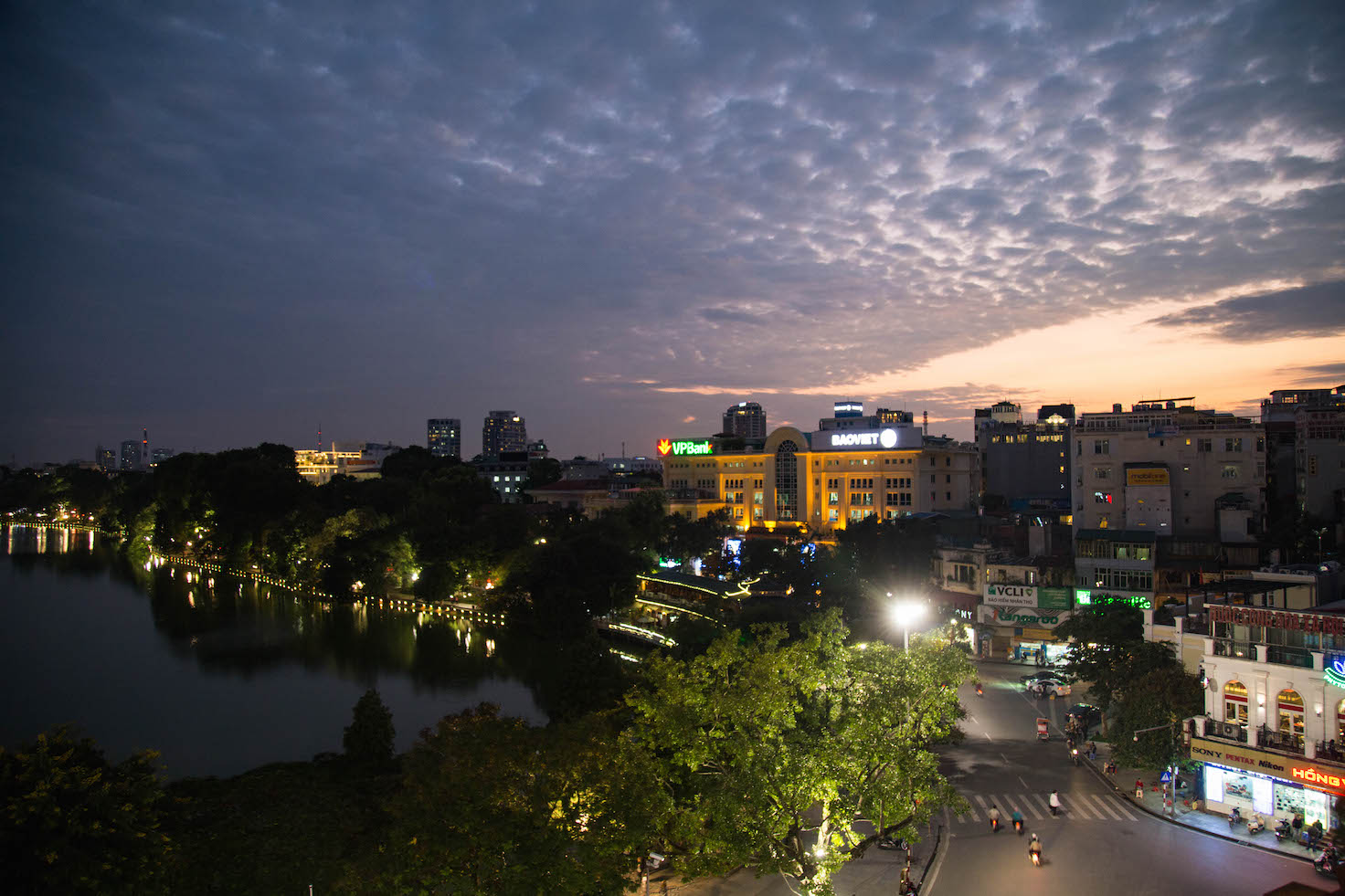 It was a dull day with cloudy and persistent periods of rain, we grabbed the yellow cover plastics bought in Ko Phangan and went to meet uncle Ho.
On the way, we passed by the Temple of Literature “Van Mieu” ranked as one of Hanoi’s most important cultural places. An ancient complex honoring Confucius, 72 disciples and nowadays to celebrate the doctorates and high-rank scholars of Vietnam. 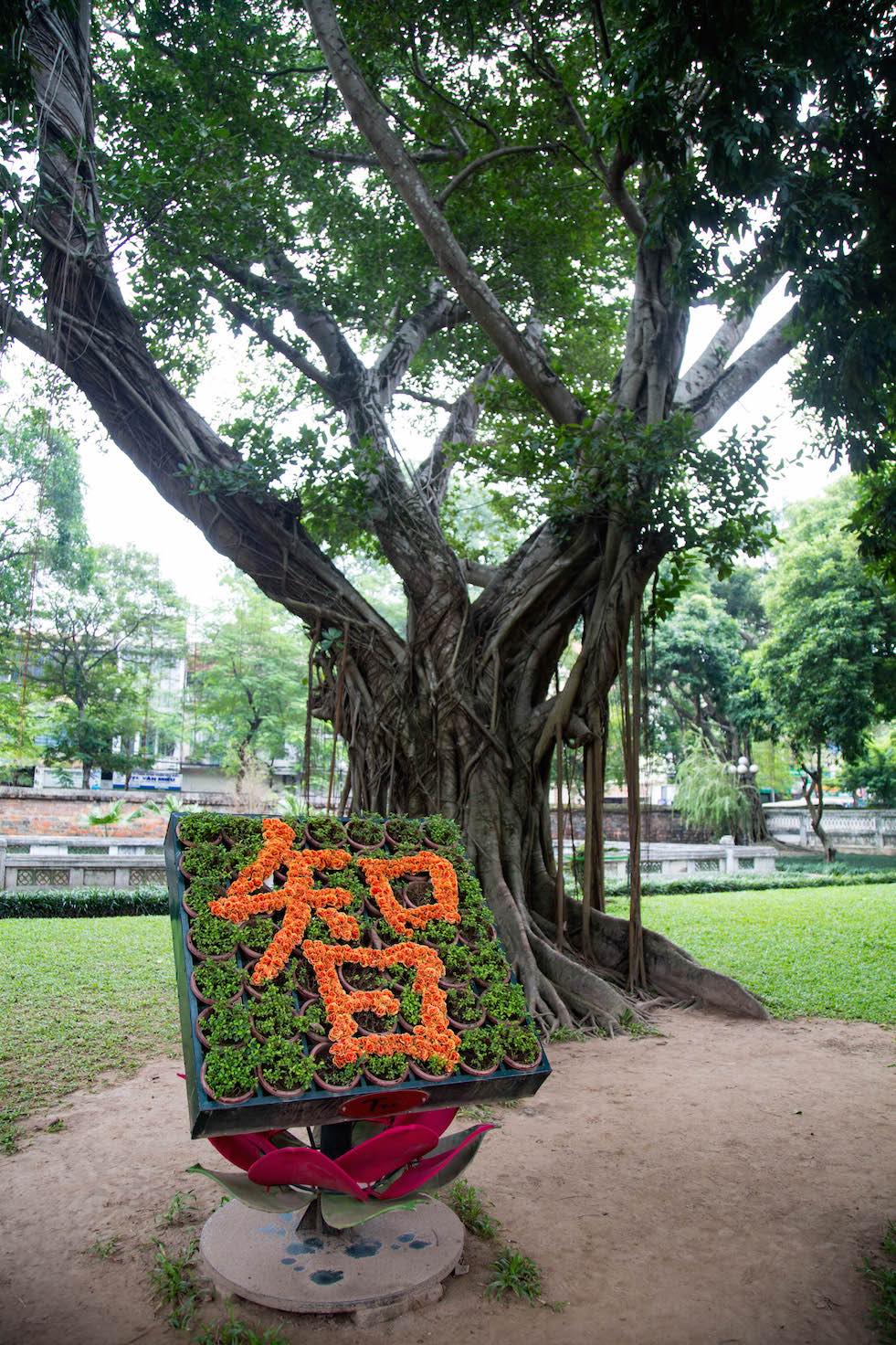 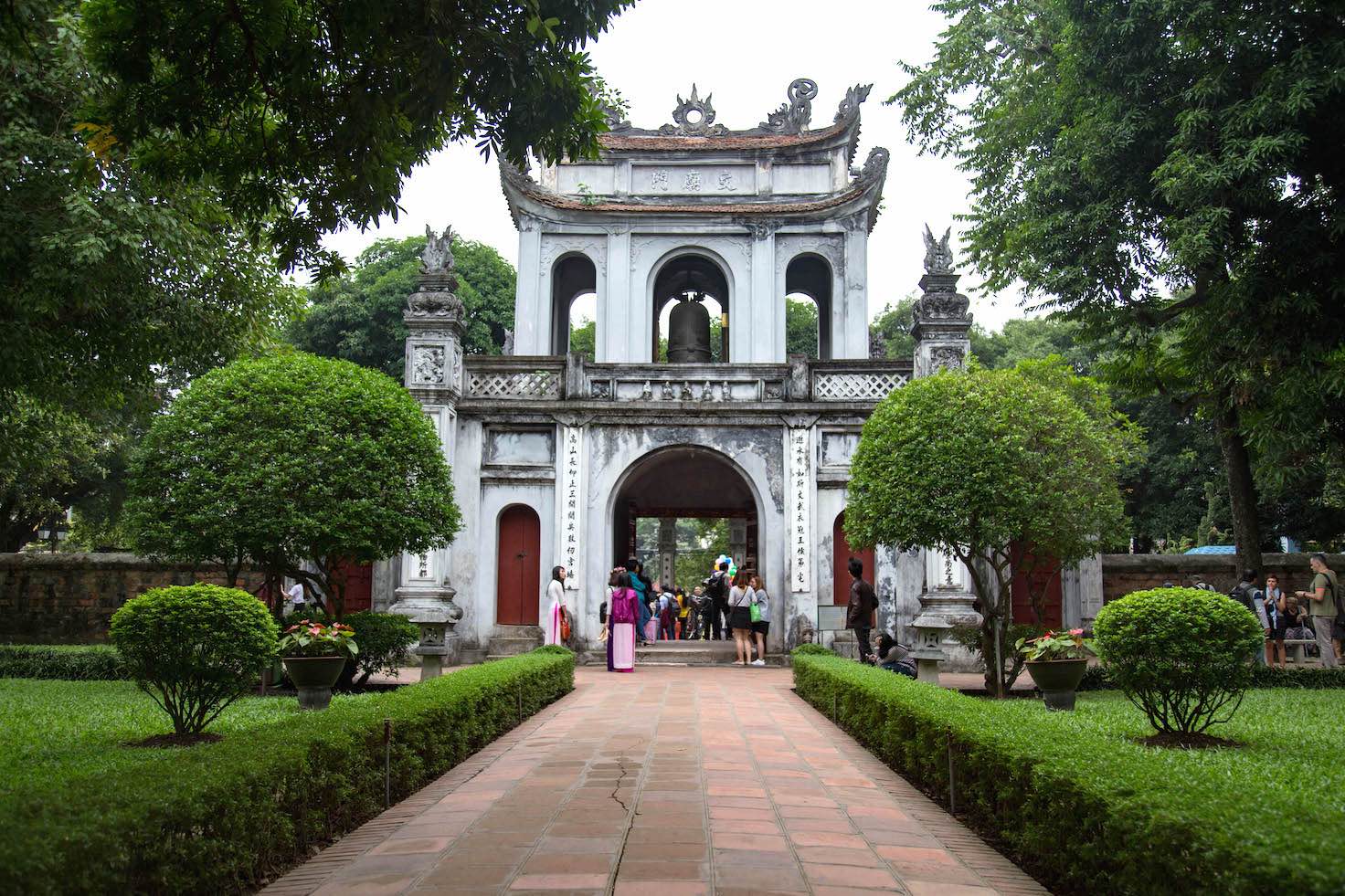 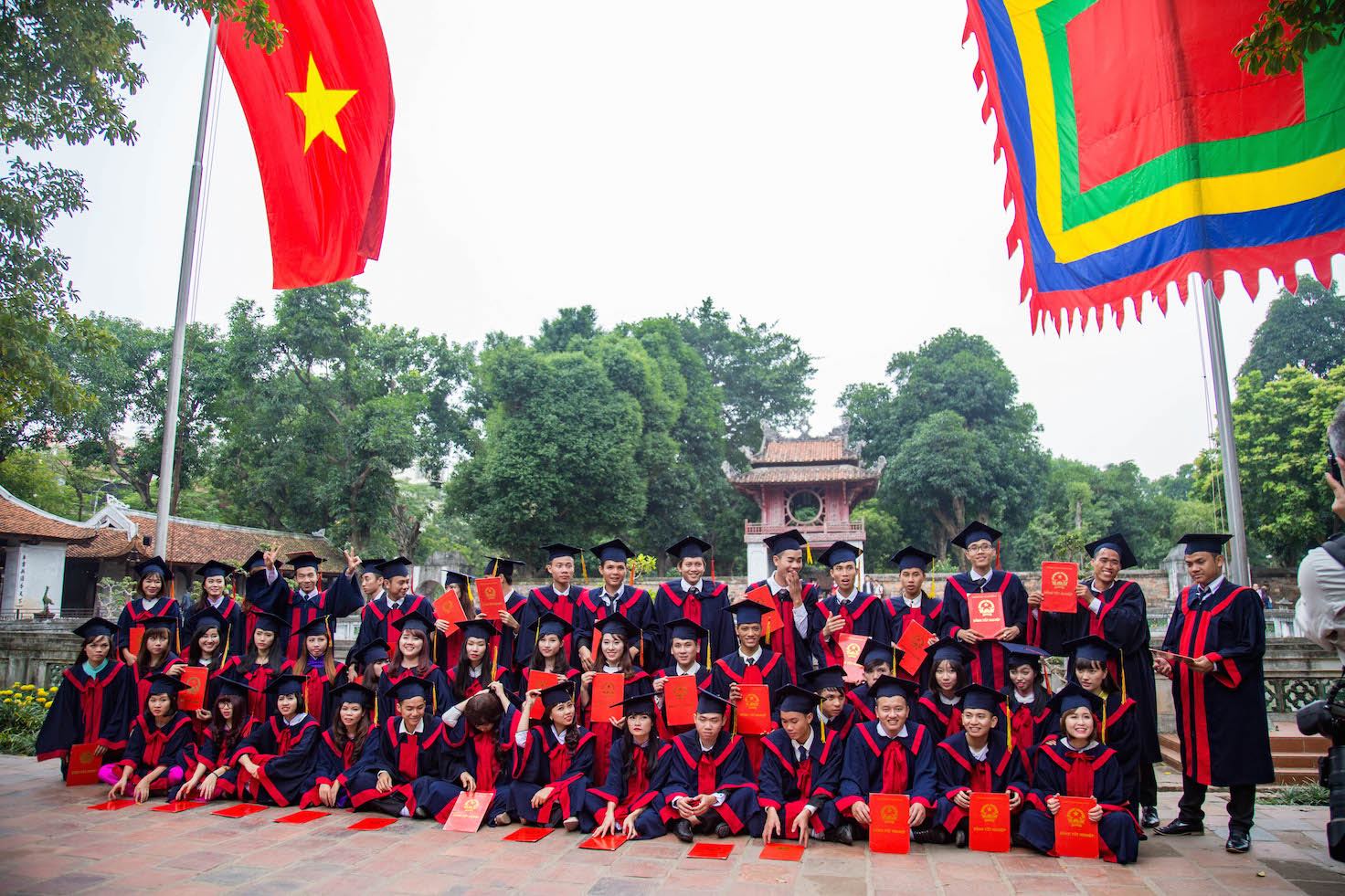 As we were getting near the Ho Chi Minh Mausoleum in Ba Dinh Square, We started to become anxious about the fact of seeing the most iconic and popular leader of Vietnam.
The entrance was free of charge and involved a set of strictly enforced regulations. No short skirts, taking photos, talking or finger-pointing was strictly prohibited.
It opens from 8AM-11AM on Monday to Fridays and normally is super crowded, but on that day there was not so manny people, maybe because of the weather.

Inside the building’s marble entrance hall, Ho Chi Minh’s most quoted maxim greeted us “nothing is more important than independence and freedom”. Going up the stairs, into a creepy room where his body is preserved in a glass case. It was a strange feeling the first time we saw his pale figure illuminated by a low light in a solemn atmosphere.

The days were passing fast, we were becoming a part of Hanoi’s daily routine and the place where we were spending more time during our travel. Not because we were liking it more than others, perhaps due to the fact we didn’t knew if we would go to Laos, Cambodia, Malaysia or Singapore. Everything was pending on our mood and on the tickets price out of the country. 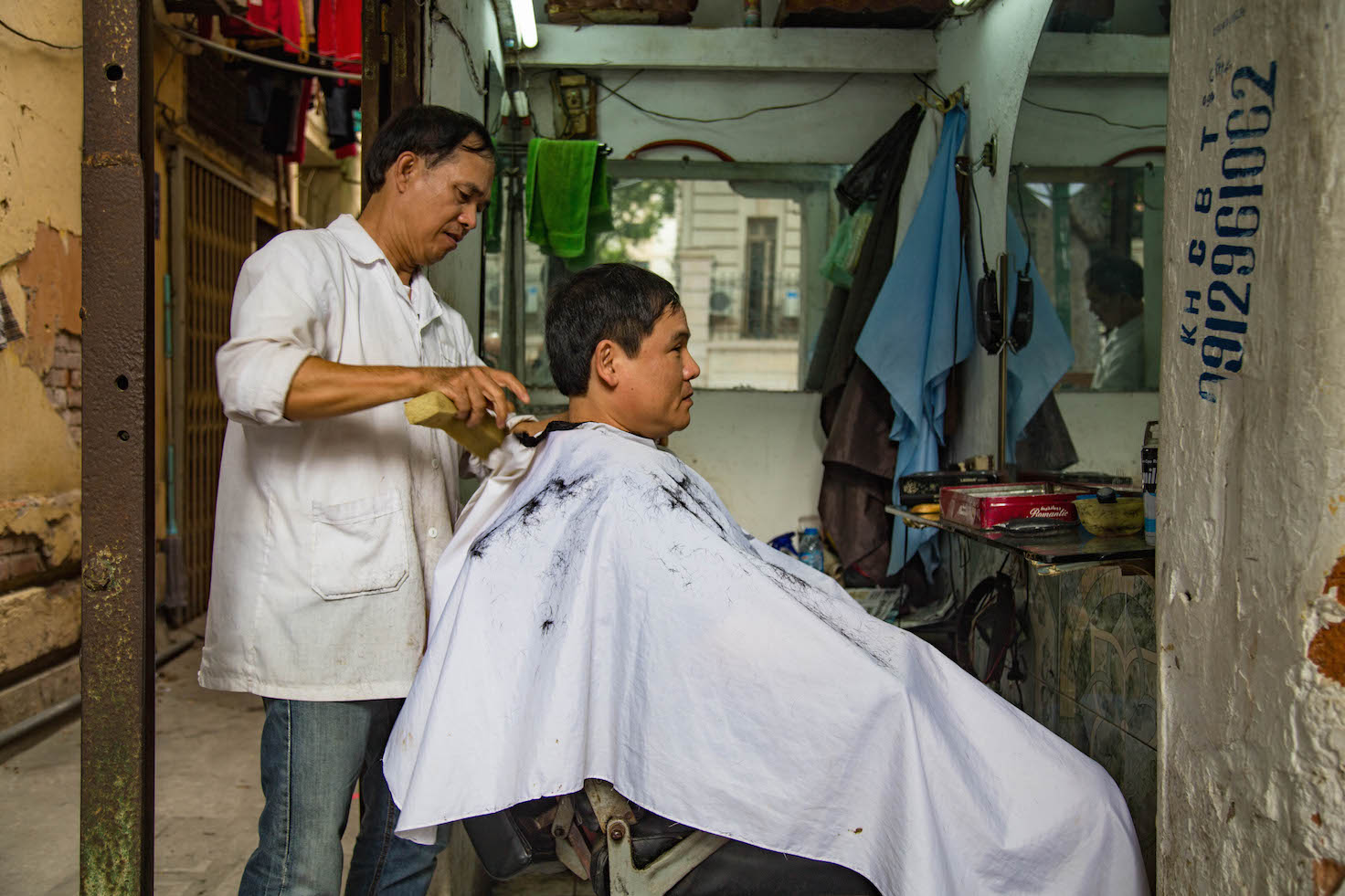 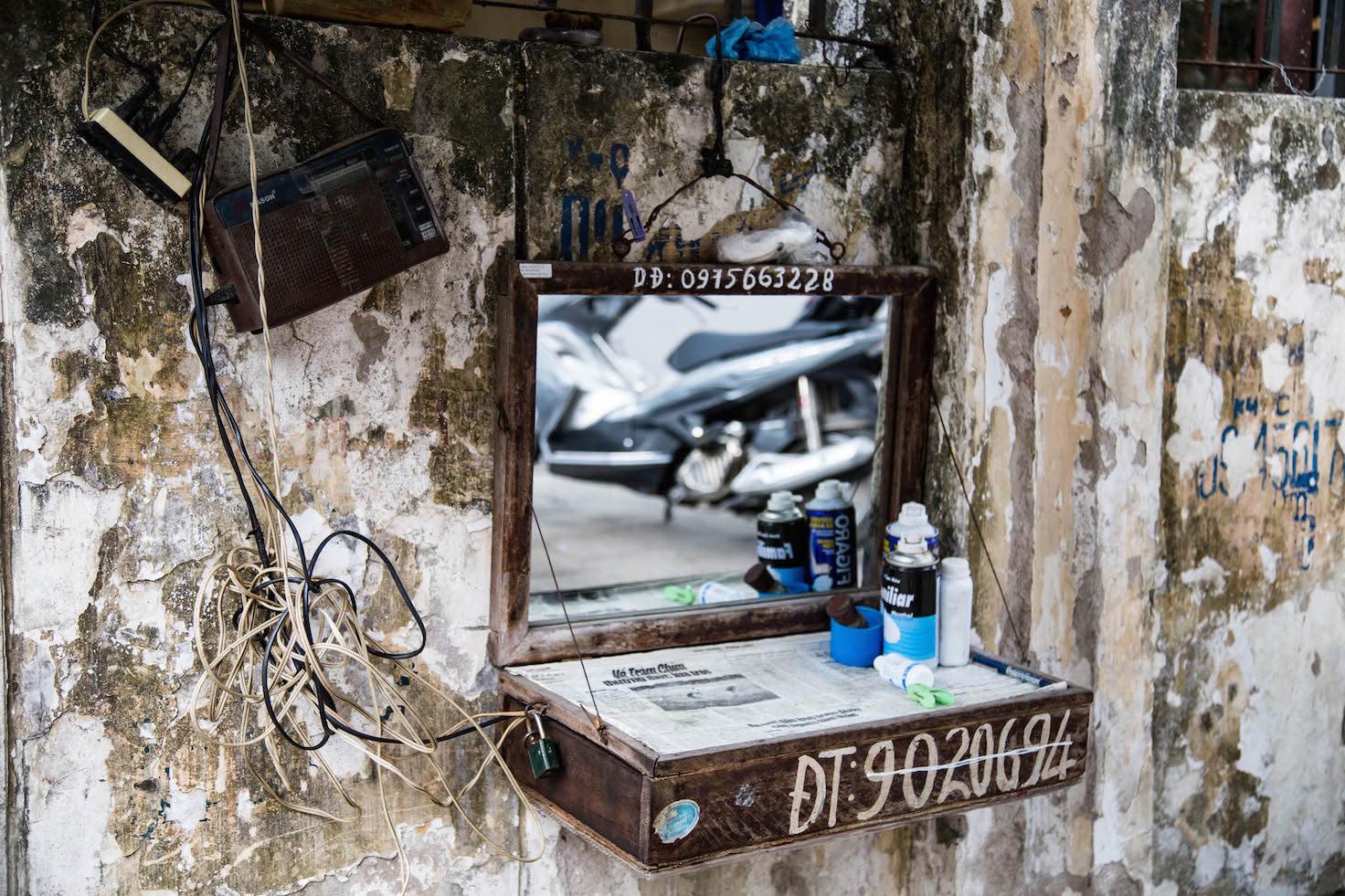 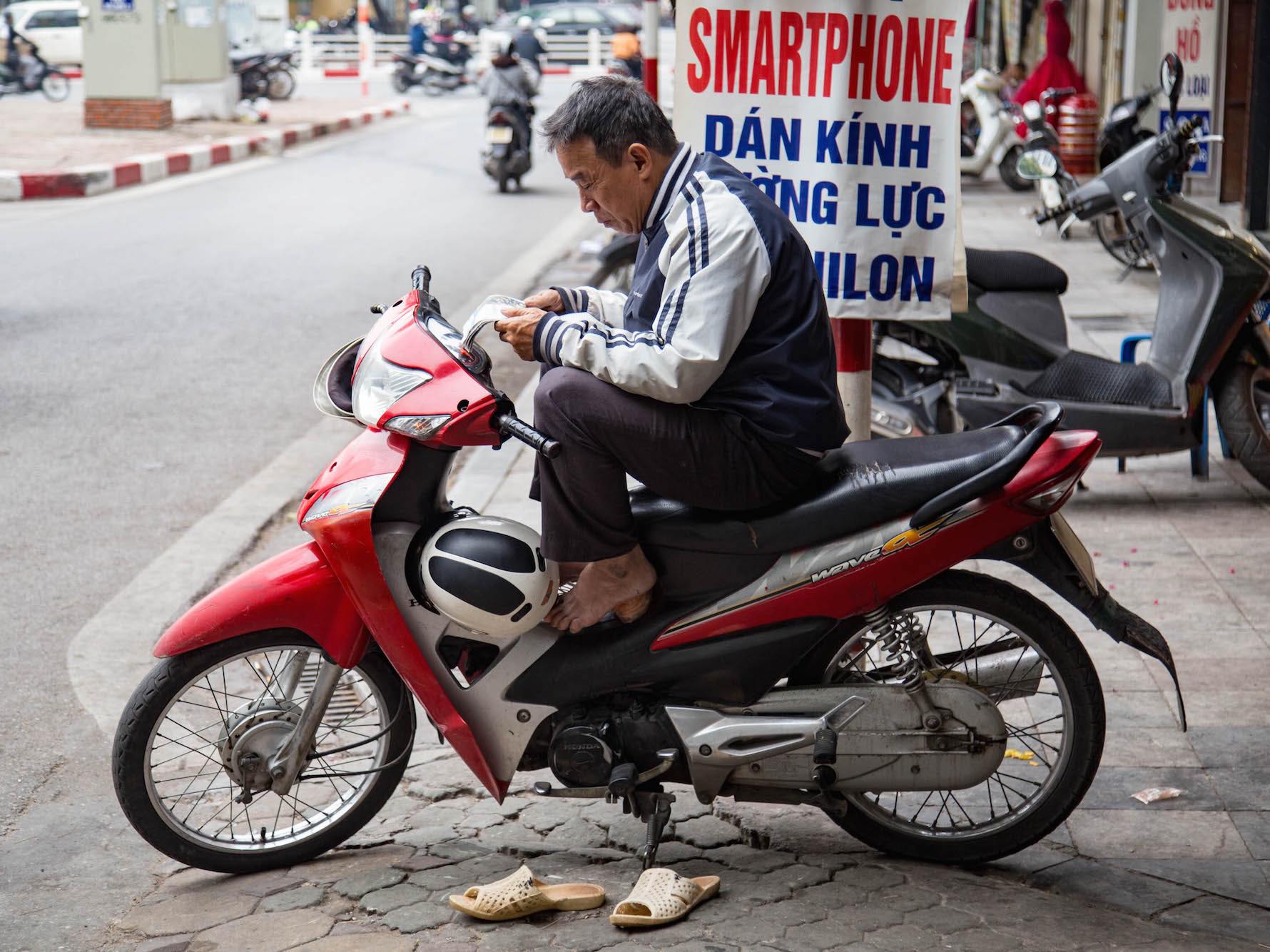 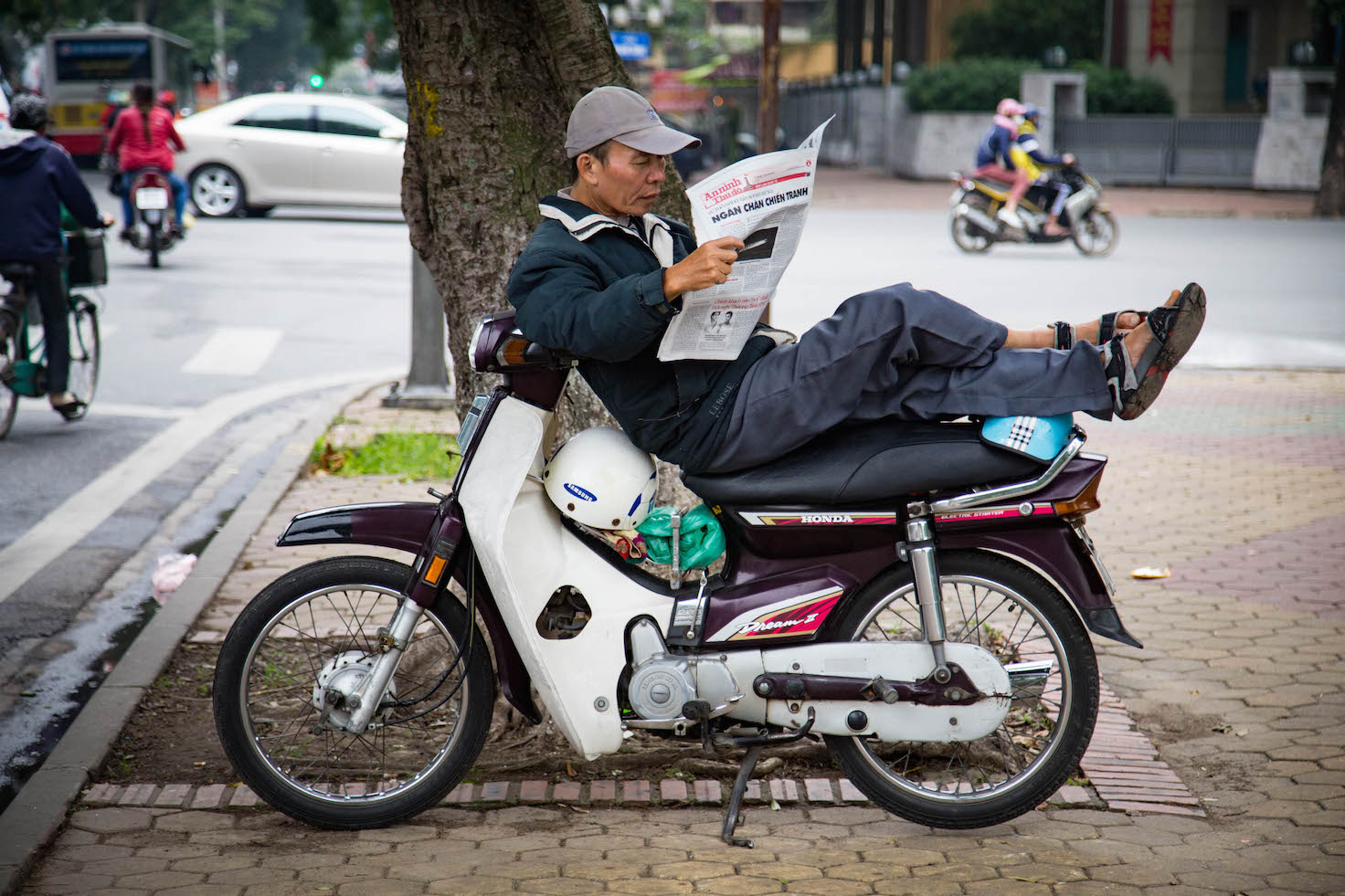 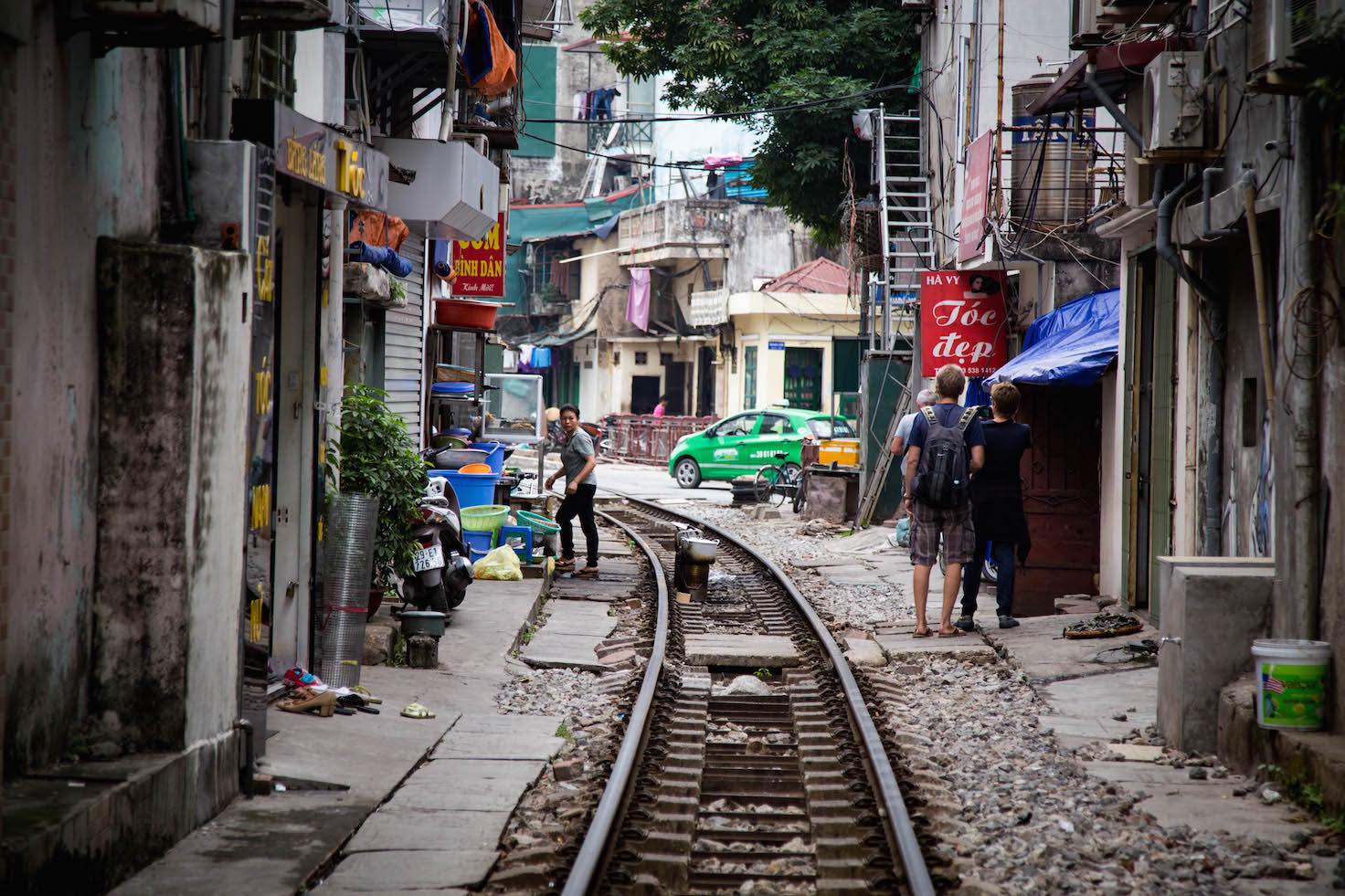 Skipping the tourist route we went to Hanoi´s Cinematheque and watch the documentary film “With or without me” with Q&A session with the directors Tran Phuong Thao and Swann Dubus after the screening. A touching portrayal of two heroin drug addicts from the region of Dien Bien.

One of our favorite places in Hanoi was Cong Caphe where we spend hours working on our blog meanwhile drinking a tasty Coconut coffee shake and let us tell you…it was the best ever. 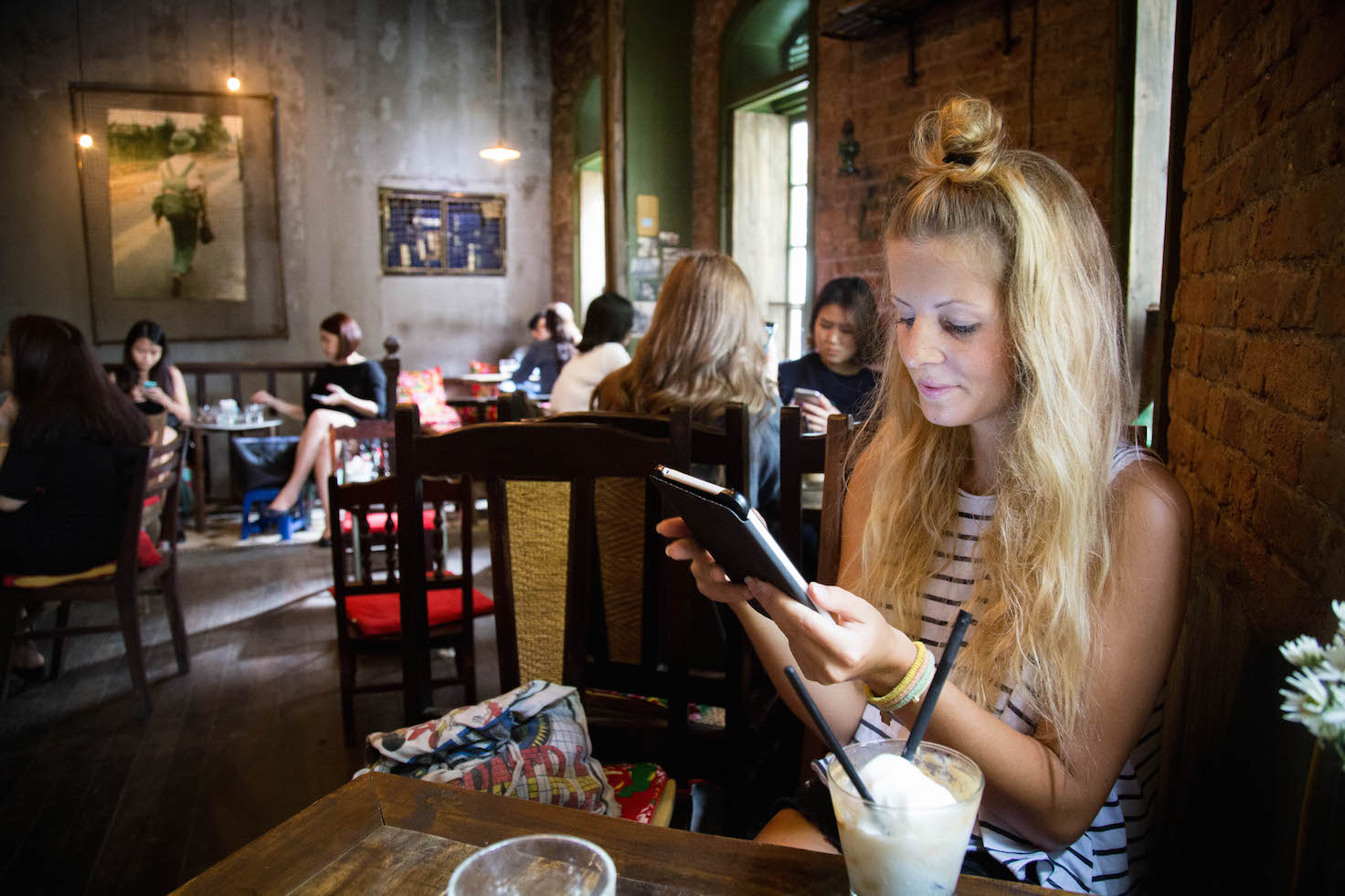 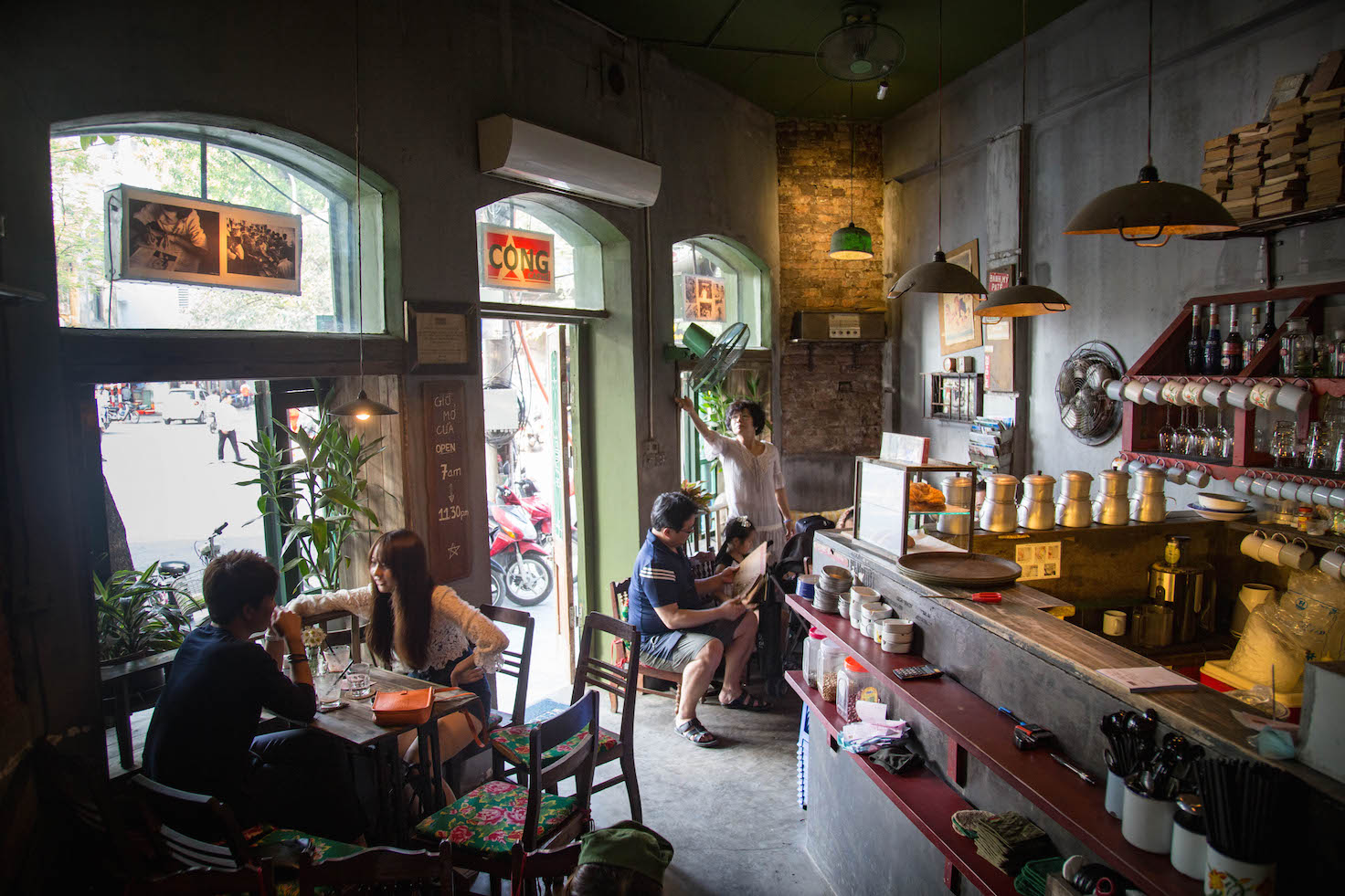 During the evenings, we always would go to the typical beer corners where we drank draft beer for 5000 Dongs (20 cents). For dinner, we normally choose the BBQ street restaurants, where we could order a set of meat, vegetables and grill it by ourselves. 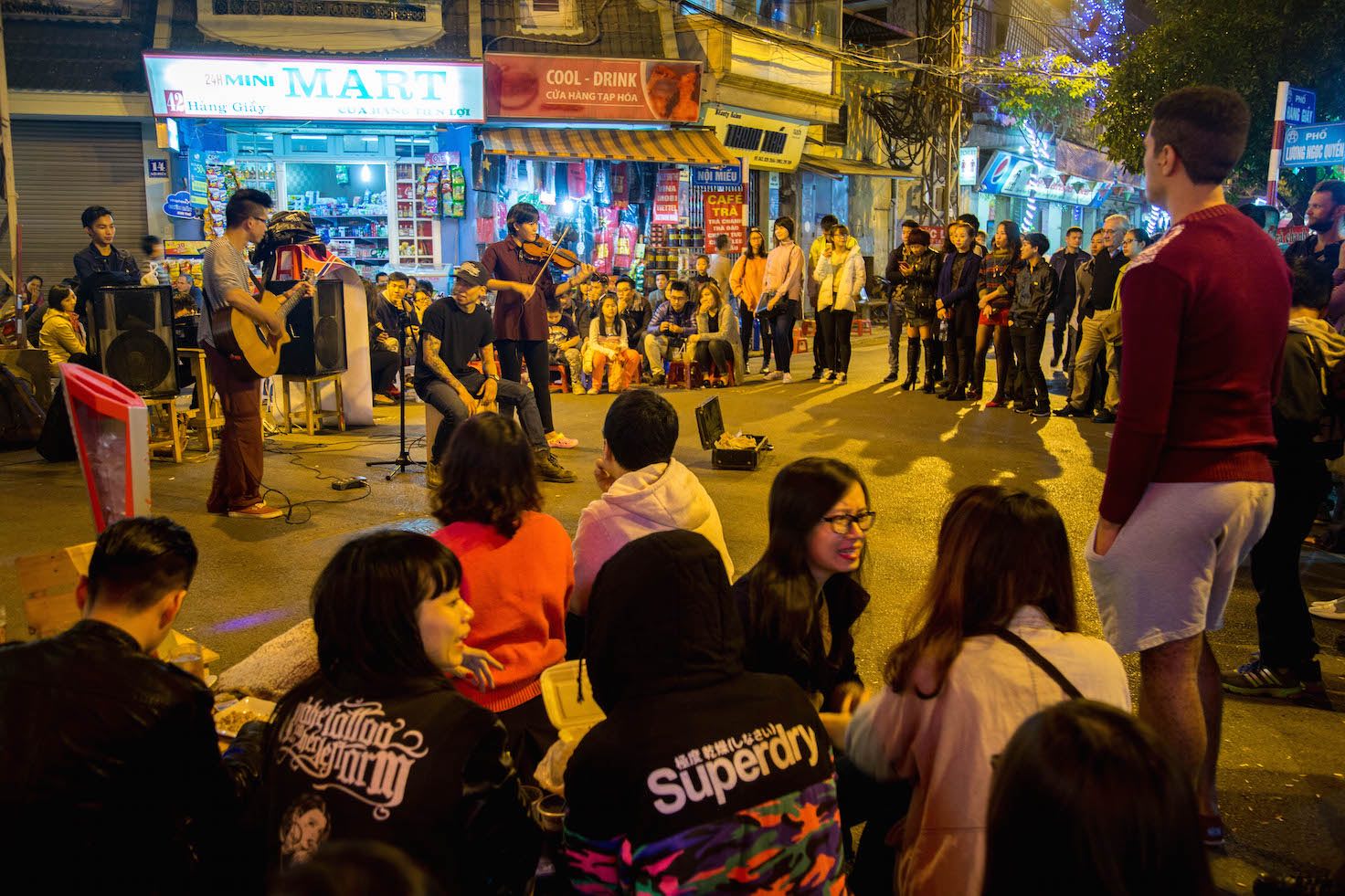 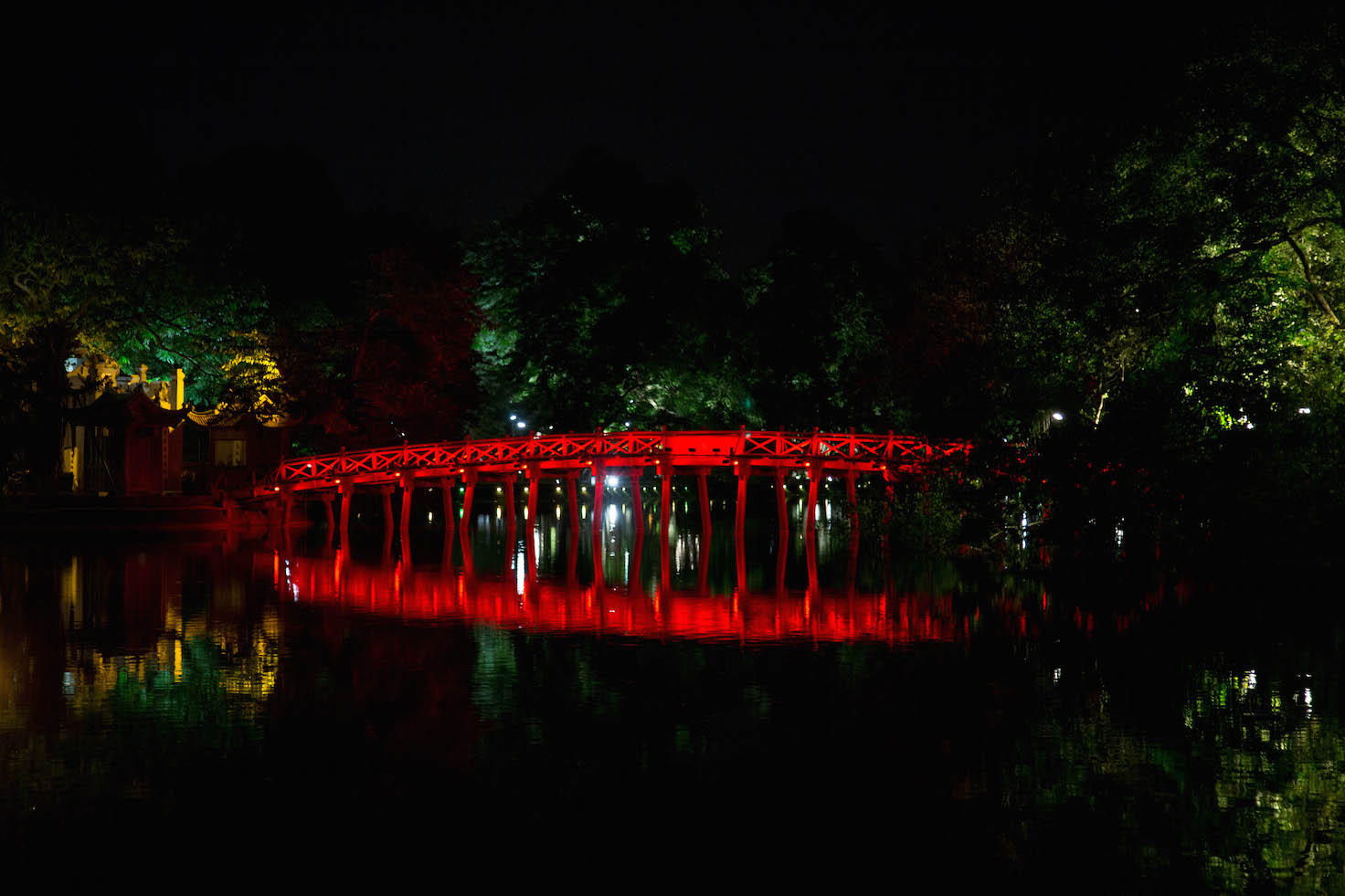 When we first planned our travel through Southeast Asia, Vietnam was on our priority list, we both were curious about it and there was one main attraction that we couldn’t miss. Halong Bay, our next destination.

Meeting Uncle Ho – Hanoi, Part I Halong Bay – Where the Dragon Descends to the Sea